In my writing so far, I’ve talked about different areas of concern for people with traumatic brain injuries (TBI).

We all know the lists of concerns that go with traumatic brain injuries; we live with them, we talk to our doctors about them, we read articles and blogs about them. There is a lot to know. 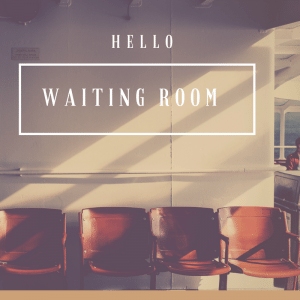 But there is one challenge that doesn’t get a lot of mention: time spent in waiting rooms.

Recovering from a TBI involves an awful lot of time sitting in waiting areas, from medical appointments, to benefits offices and social services. It all adds up to a lot of down time. If only I could figure out a way to get paid for all that time.

Doctors don’t make house calls any more, unfortunately, so it’s necessary to go where they are, and that means spending time in waiting areas. My personal care doctor works in a clinic, one that is open to the public and doesn’t make appointments. So I have to go in on days when he’s scheduled and hope I get to see him before I need another shave or to change underwear.

Sitting in the waiting room is like the adult version of being sent to the principal’s office. You don’t know what your punishment will be and you have all the time in the world to let your imagination run wild and for the dread to build.

In the clinic waiting area, I have lots of time to imagine which of all the medieval tortures the doctor has for me this time. But even knowing what I’m in for doesn’t always help, like when I’m there for a blood test–I hate needles beyond words.

And the waiting for other services. It seems lately there are things that are pretty much common to waiting areas. Things like the young mom with loud, rowdy, out of control kids, people talking loudly on cell phones or loudly and publicly using their cell phone to show everyone how bad their taste in music is. And the people who seem to be the most ignorant talking the loudest.

You could almost make a drinking game out of it.

It seems like it’s always the same crowd no matter what waiting area I have to wait in. It’s almost like someone is keeping tabs on where I’m going to be and busing all the same people there.

And it seems waiting areas all order the same magazines, none of which hold any interest for me. They usually seem to be mostly celebrity gossip magazines and children’s publications. (I have to admit, though, that I’m more inclined to pick up a copy of Highlights for Children than People magazine).

All of these things can be found every day of the week in my clinic’s waiting area. But they have come up with an additional torture, one found in lots of medical waiting areas–the big screen television playing medical infomercials endlessly.

Lucky thing I always bring a book with me.

Enough bellyaching for now, though; I recognize waiting areas are a necessary evil and I can’t do anything to change that.

But I sure wish I could do something about those incomprehensible, impenetrable voice mail menus that companies and agencies make me have to navigate. Well, that’s another story for another day.