Erin Thompson is an artist with a purpose.

She loves to share her work with the community to raise awareness; at the Brain Energy Support Team (BEST), we’ve been honored to be a big part of Erin’s art and efforts.

The artist, who is also a family member of a brain injury survivor, has been volunteering her time and talents with BEST for years.

BEST is delighted and honored to announce that Erin Thompson has been named our BEST Superhero of the Month for December 2019. 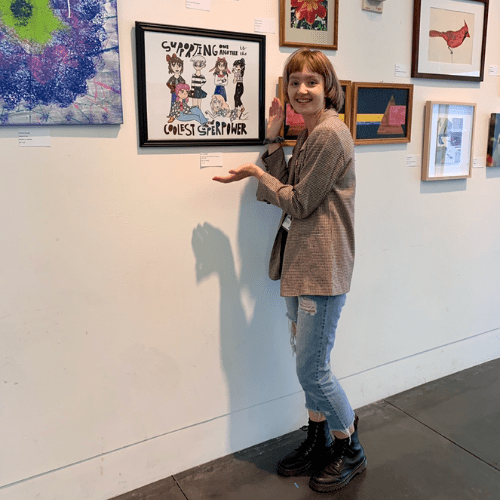 Here’s what her nominator had to say about her:

Since she was in junior high school, Erin has been contributing her time, energy and artistic talents as a BEST volunteer.

Erin has been a longtime artist, and has provided BEST with lots of original art used in social media posts, blog posts, and for special events. Erin has assisted the BEST Communications Manager with consulting for Instagram and for other social media endeavors.

Erin has also assisted as needed for special community events. Her biggest contribution to event work for BEST, was not only to contribute original artwork to the Tacoma Art Museum Local Community Art Installation, BEST’s “Superhero” show running from October 16, 2019 through December 26, 2019, she provided valuable assistance in setting up for the show and opening night reception.

Currently a college freshman at the University of Washington in Tacoma, Erin is studying business marketing and continues to create art. She is passionate about supporting BEST and the Washington State brain injury community, and will continue her contributions.

Thank you Erin for all of your contributions to BEST! You are super! 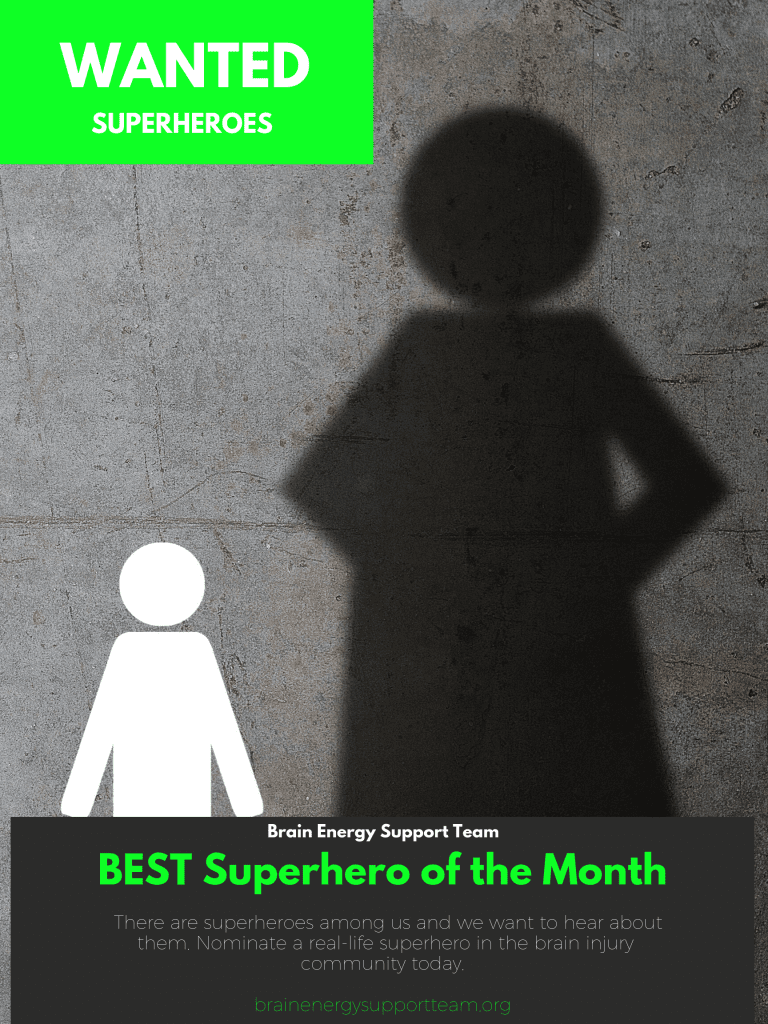 We are now accepting nominations for 2020! Nominate your real-life superhero today by clicking here. 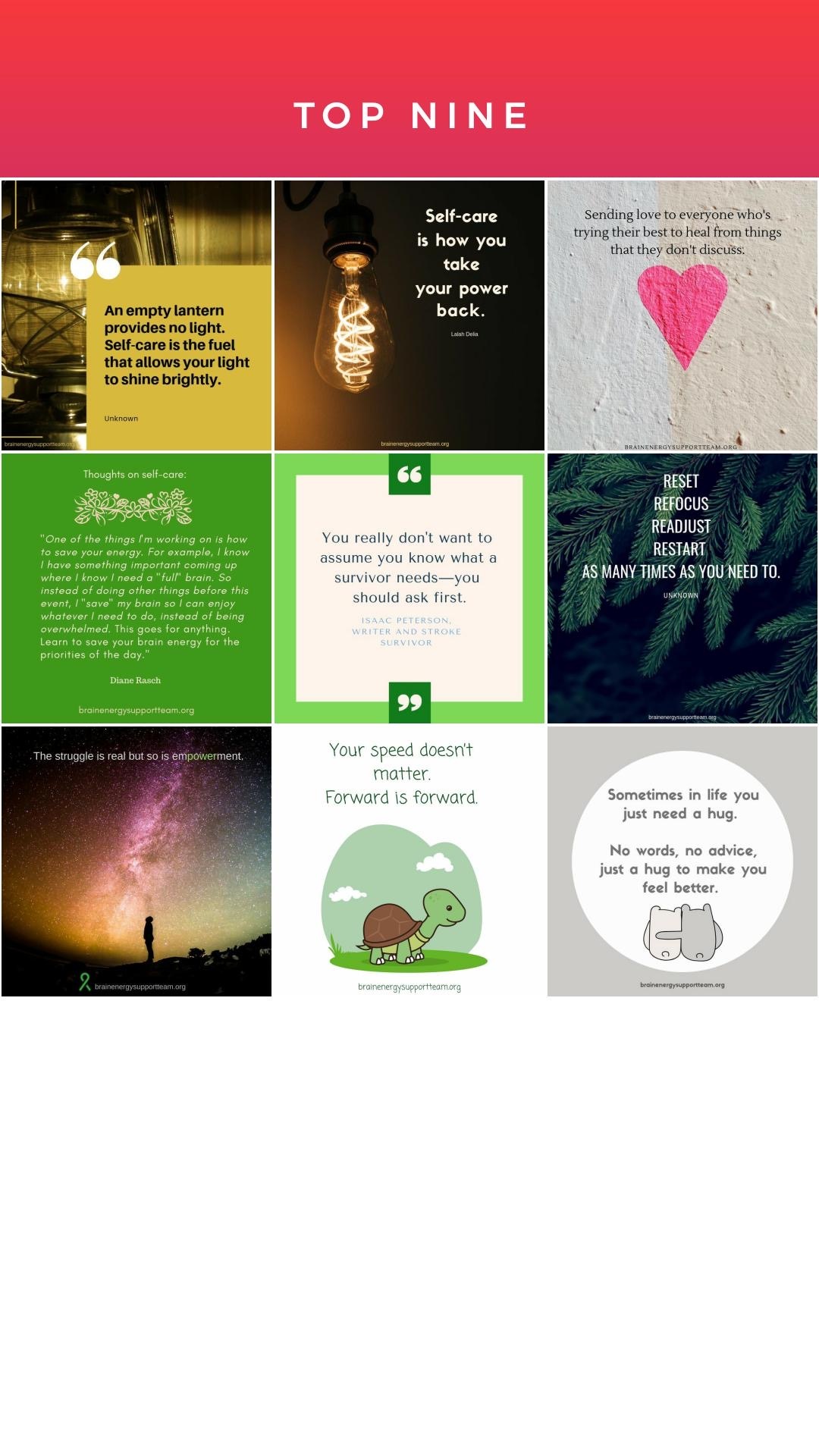 Spent a great morning at the Tacoma Art Museum with fellow superheroes 🦸‍♀️ on Saturday, December 21, 2019!

Our BEST thanks, love ❤️ and hugs to Heath and Renee (of collidedscopes.com), artist, author and instructor, Renne Emiko Brock,  artist and BEST volunteer, Erin T., and Shane N. for hanging out and just being SUPER! Catch our community art installation “Superhero “ before it takes flight! Last day to view is December 26th! ❤️🦸‍♀️ 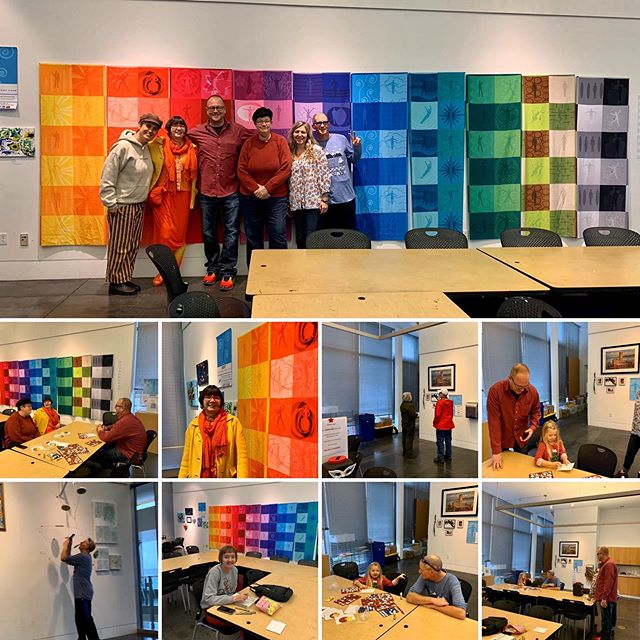 “Superhero” show (Tacoma Art Museum, Tacoma, WA): BEST be at the museum for a card making session and meet ‘n’ greet on Saturday, December 21st from 10 am to 1 pm.

We’d love to see you! 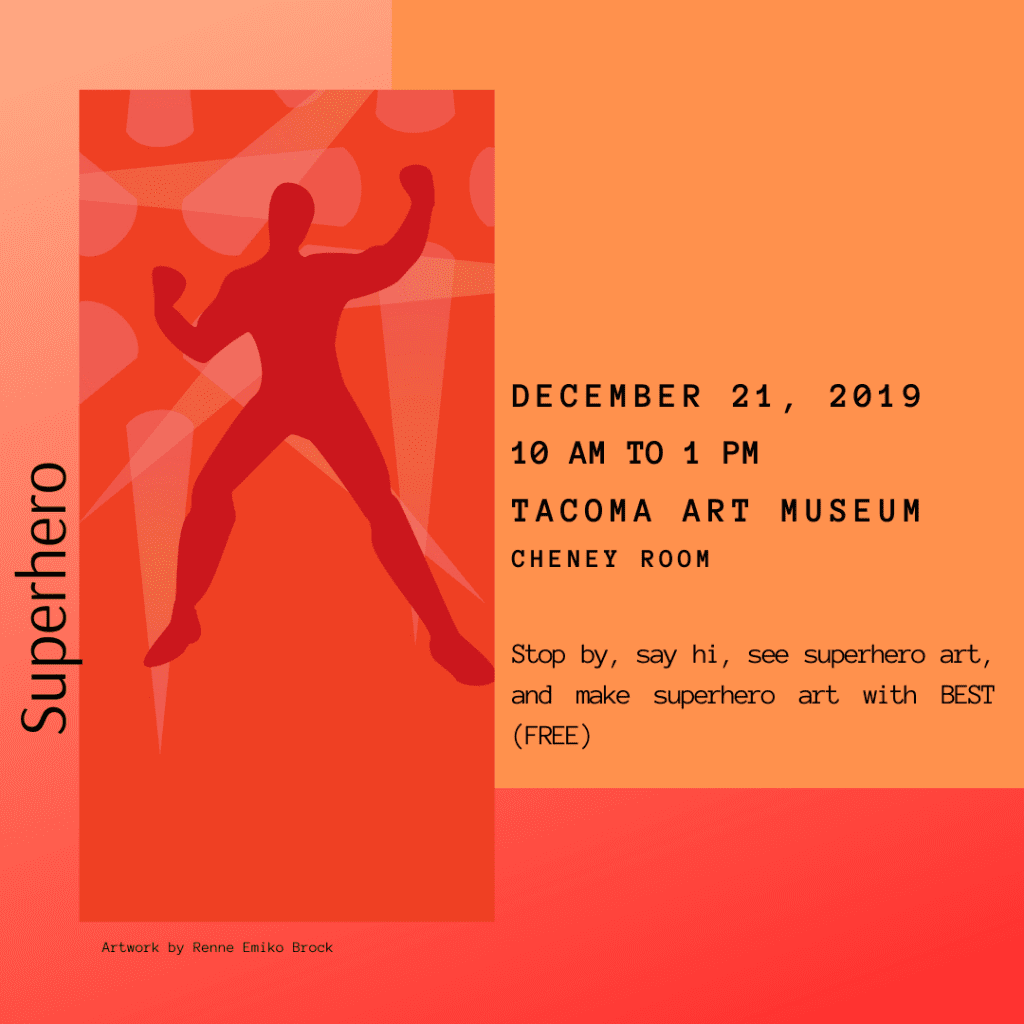 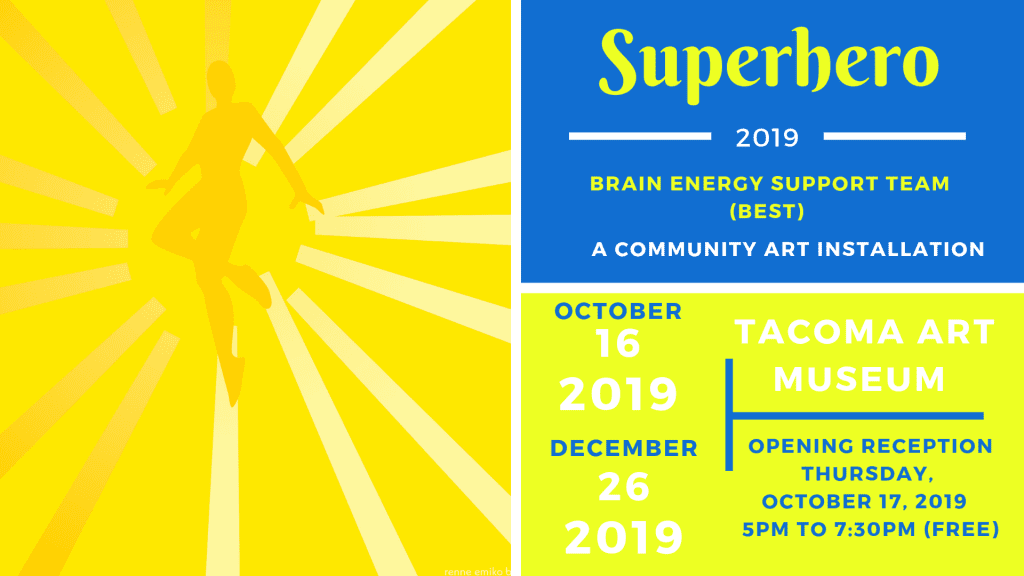 The BEST Superheroes of the Month for 2019 are the real-life superheroes who support the brain injury community.

Nominations being accepted for the new year! Click here to learn more! 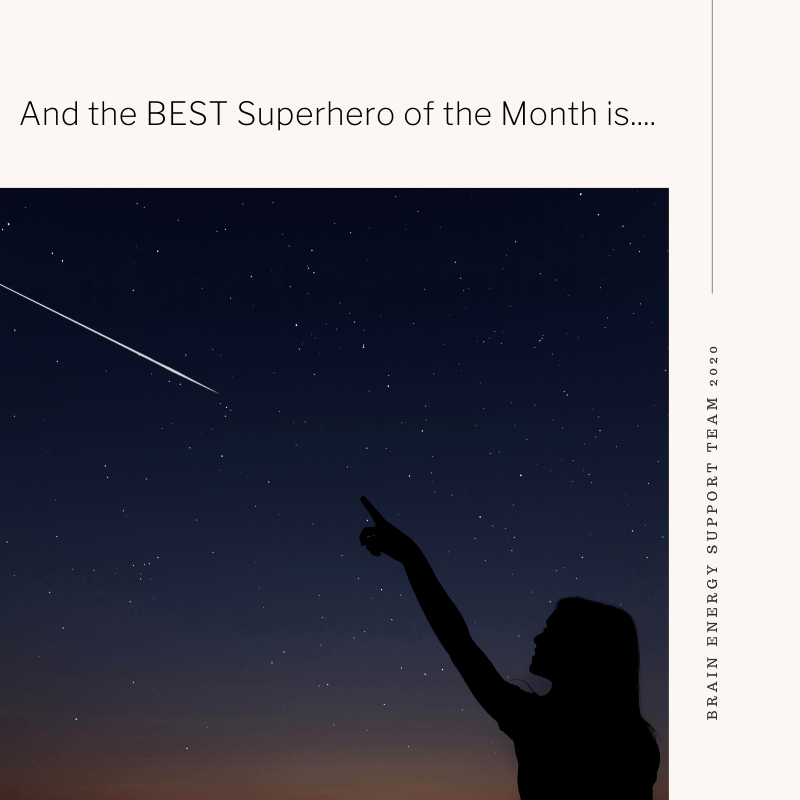 (Editor’s note: If you could create a movie about your life, what would that look like? Writer, guest blog contributor and stroke survivor, Isaac Peterson, explores that very question. Enjoy! KT) 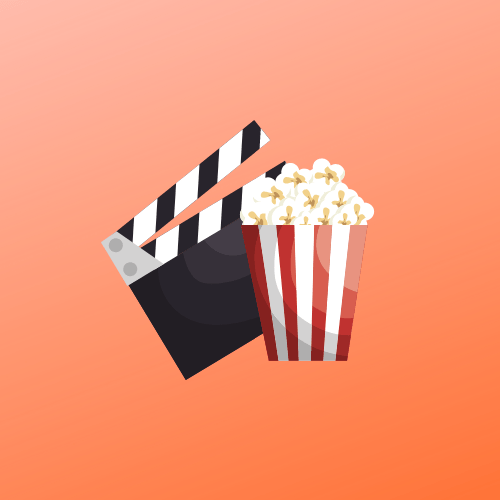 My mind was just wandering again, and for some reason I wondered; when they make the movie about my life, how will it turn out?

Well, I can’t say whether someone would want to put my life up on the silver screen, but I know that if/when they do, I’d want Denzel Washington to play me, and be the star of the movie.

That’s not going to happen,  so I guess I should just make my own movie about me, starring me.

Looking at my life as a movie, it’s being filmed and the script is being written every day. The cast is constantly changing but there are some major co-stars and a cast of thousands in the background. Those thousands will include all of you reading, since you’re all such an important part of my life.

I’m just sorry I can’t give you all some screen time.

In my movie, I’m not just the star–I’m the writer, director, producer, and casting director. I’m in charge of developing the plot and the general direction my movie takes.

The hard part is deciding what scenes will make it into my movie. What are the major highlights to include? What low-lights? The times I won, the times I lost, the choices I made and the opportunities I missed.

I think the first part of my movie would feature a perpetually wisecracking me when I was younger, a guitarist, journalist, a leader of men and a follower of women, all sorts of roles I’ve played through my life.

But the main focus of my movie would be surviving a major stroke, and how I used my second chance at life. I wrote once that the rest of my story will not be written for me, it will be written by me, so I’m going to make sure to write a blockbuster ending.

Maybe my movie will get reviews like the feel good movie of the year. It will if I have anything to say about it; and I have lots of say about how interesting my movie turns out.

I’m not sure though whether it would be a drama, a comedy, adventure or something else. Who knows? All I know for sure is I want to live a life interesting enough to make a great movie. I know my mom would surely go see it.

There are billions of movies being made every day, one for every single one of us, whether we realize it or not.

Remember, it’s all up to you and you are the director every day. And you get to write your own script. 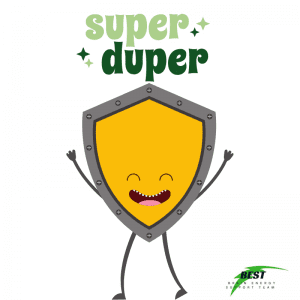 These are just a few of the many adjectives that describe our dynamic duo named as the BEST Superheroes of the Month for November 2019.

BEST offers our warm appreciation and congratulations to Kyle Wylie and Darice Konkler. This pair of real-life superheroes took support to a superhero level and helped other support group members soar to new heights.

Here’s what their nominator had to say about them:

I would like to nominate Kyle Wylie and Darice Konkler. Kyle is a caregiver and Darice is a survivor. They were members of the Edmonds Head Injury Group and are true superheroes. Kyle led the group on two occasions when I could not attend. They always contributed to the group, were very supportive, contributed food for meetings, and supported me as a facilitator. Kyle was the first to show up at picnics, ran the barbecue, and always made sure everything was packed and cleaned up. Kyle and Darice traveled three hours each way to attend our last picnic and visit with the group!

Thank you, Kyle and Darice for all that you do to support others! So, who will the next superhero of the month be?

Do you know a survivor, caregiver or community supporter who is putting the power in personal empowerment? Soaring to new heights? Doing cool things?  Bringing superhero-size support to the brain injury community?

Nominate your superhero for the BEST Superhero of the Month for some superhero team recognition.

The Brain Injury Community Support Group in Spokane, Washington, created a memorable evening of celebration and giving thanks. 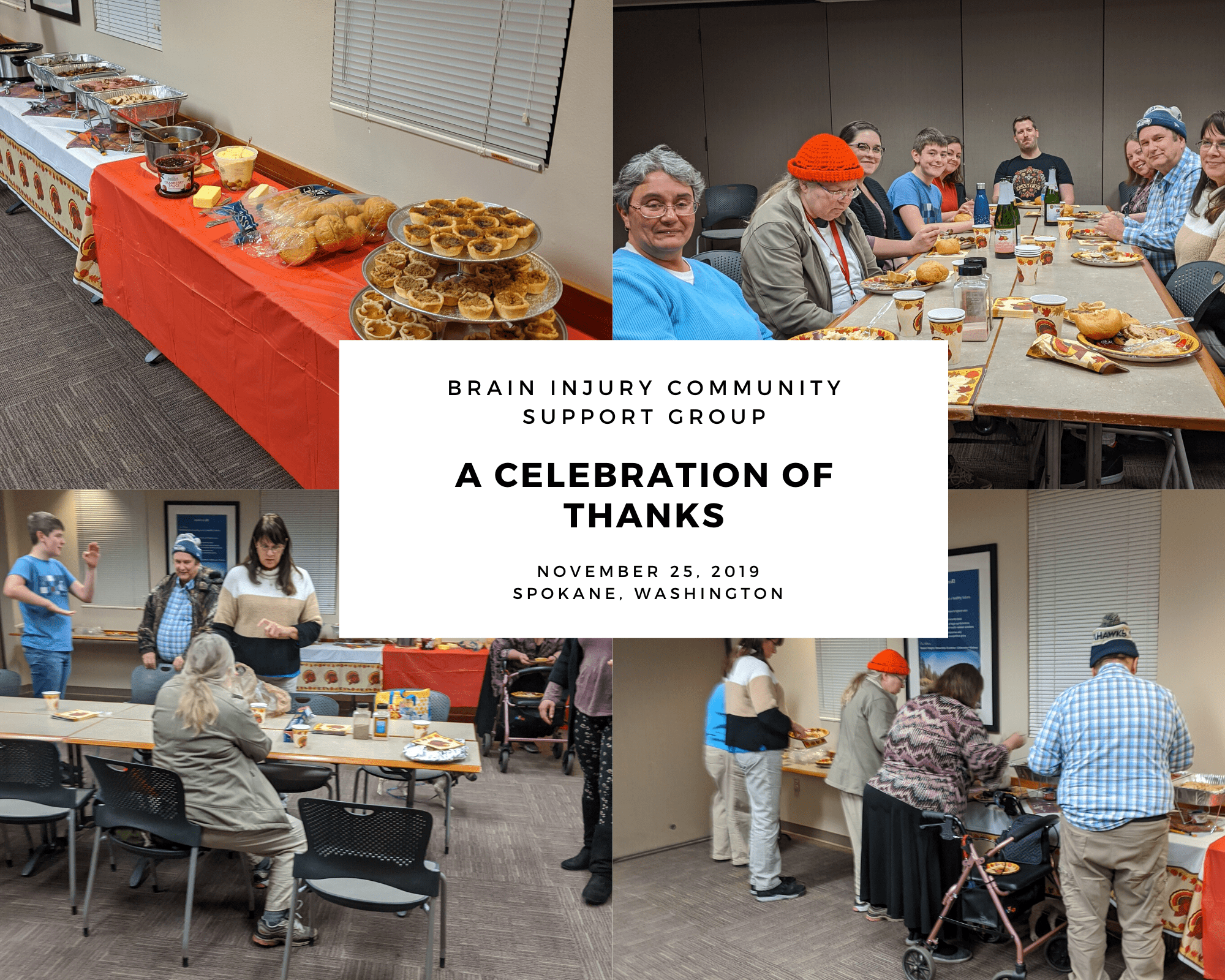 Photos by N.Mehrnoosh, Collage by K.Thompson

Utilizing the culinary talents of Holly Blomquist-Worley and Marysa Rogozynski, these two women prepared a Thanksgiving feast for support group members to savor and enjoy.

Held at the Multicare Valley Hospital on the evening of  November 25th, BESTies enjoyed each other’s company, some delicious food, and had the opportunity to give thanks.

Judging by the smiles and this delightful meal in the pictures, a good time (and full bellies!) were had by all. 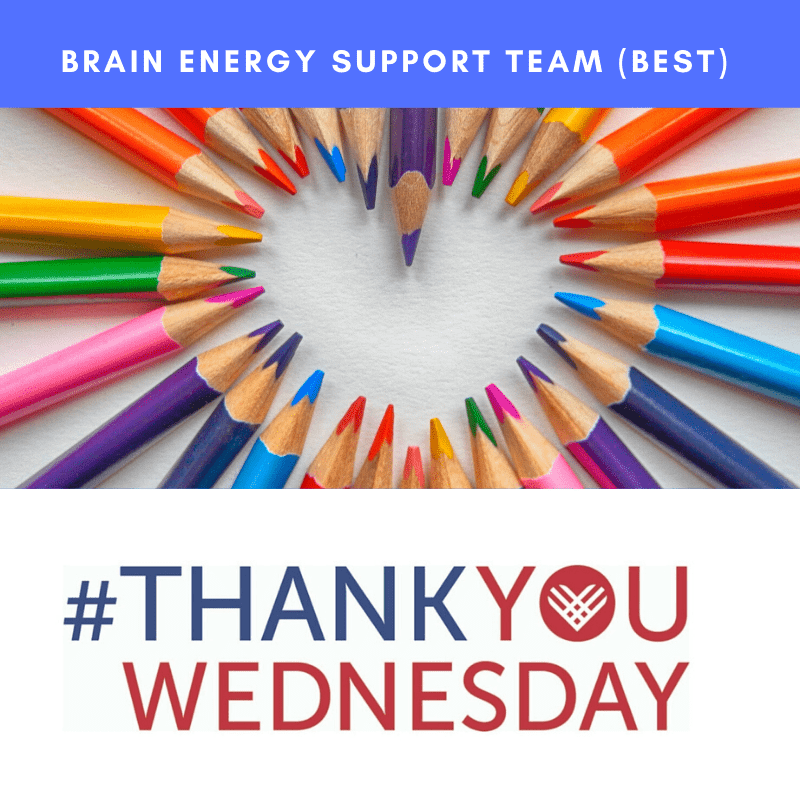 The Brain Energy Support Team (BEST) has just witnessed the most beautiful art of sharing and caring.

Thank you for helping to support the empowerment artists of the brain injury community and their families.

With your generous help, you are providing the support for more learning materials and educational opportunities to tap into creative tools, resources and strategies for brain injury survivors to live the BEST lives possible after brain injury.

You put the “giving” in Giving Tuesday yesterday, the international day of giving back to causes that make a difference in the lives of others.

Didn’t get a chance to contribute to the Giving Tuesday cause and our goal? No worries!

Click here to contribute on our fast and secure donation page.

Donations of any amount are welcomed and greatly appreciated.

As we reflect on 2019, the art of living our BEST lives possible in beautiful color and texture was evident.

Looking forward to the new brushstrokes of 2020. Thanks for making 2019 so special. 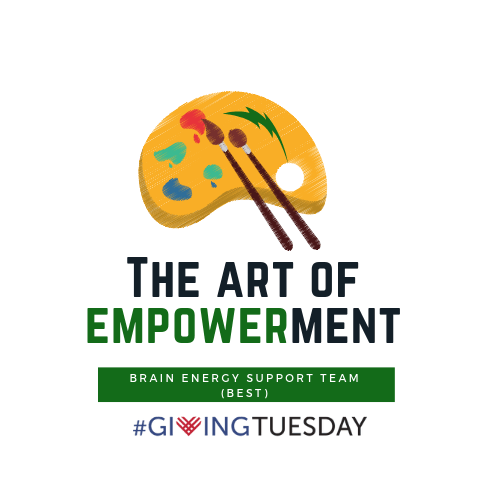 Each person in the brain injury community has their own unique form of personal empowerment.

That’s why at BEST, we help people, who have a canvas at the ready, with the tools, strategies and resources to help them tap into their own kind of creativity and empowerment that works best for them.

Add that to the exciting idea of the power of being an actual artist. 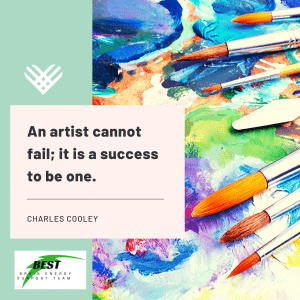 We see our community as Empowerment Artists, and there is no such thing as failure.

We’ve already begun with success by being (empowerment) artists already.

Together, let’s make beautiful and important empowerment art on our journey forward after brain injury.

Here’s your chance to practice the artistry of sharing your care, along with supporting others on their empowerment journey. 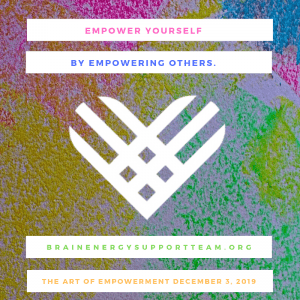 The Brain Energy Support Team (BEST) has joined #GivingTuesday, a global day of giving that harnesses the collective power of individuals, communities and organizations to encourage philanthropy and to celebrate generosity worldwide. Giving Tuesday is Tuesday, December 3, 2019.

Our theme? The Art of Empowerment.

Our goal is to raise $5K to fund the learning materials for online and in person educational opportunities and special events to help empowerment artists practice their craft.

Donations of any amount help.

While you are invited to contribute on Giving Tuesday itself, you may make a secure and fast online donation right now by clicking here.

You are also welcome to send a check by mail to:

Thank you for being a generosity artist! We appreciate YOU for your time and interest.

Would you like to some BEST artists in our community? Learn all about them and a special BEST art installation at the Tacoma Art Museum this fall. 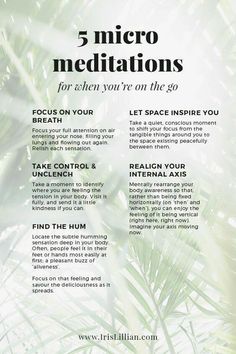 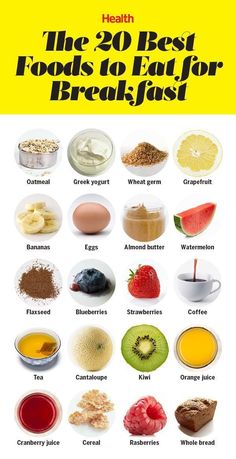 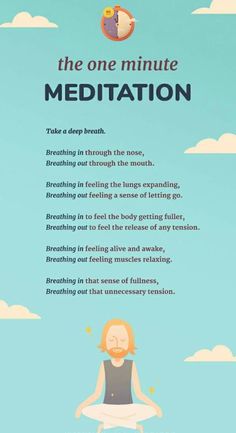 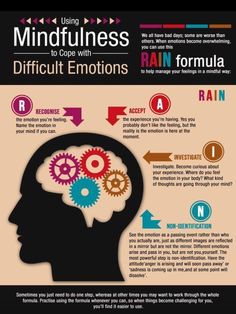 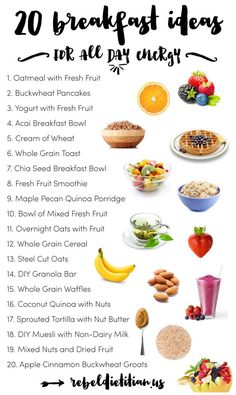 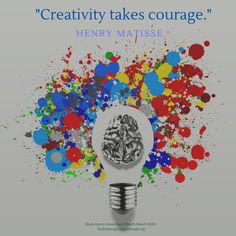