This important and comprehensive article, co-authored by BEST Executive Director, Gloria Kraegel, was recently published at AgeWise King County and it outlines respectful communication with people who have memory loss. It also features our “BEST Brings Hope” video.

To watch the “BEST Brings Hope 2015” video, please watch below!

Extra! Extra! Read all about it!

BEST Brain Energy News online comes out each Monday and is chock full of informative multi-media news stories and resources that are relevant to the brain injury community. Click HERE to read the latest edition! Missed an issue? No worries! We have a handy-dandy archive section on this dedicated news page. Enjoy! 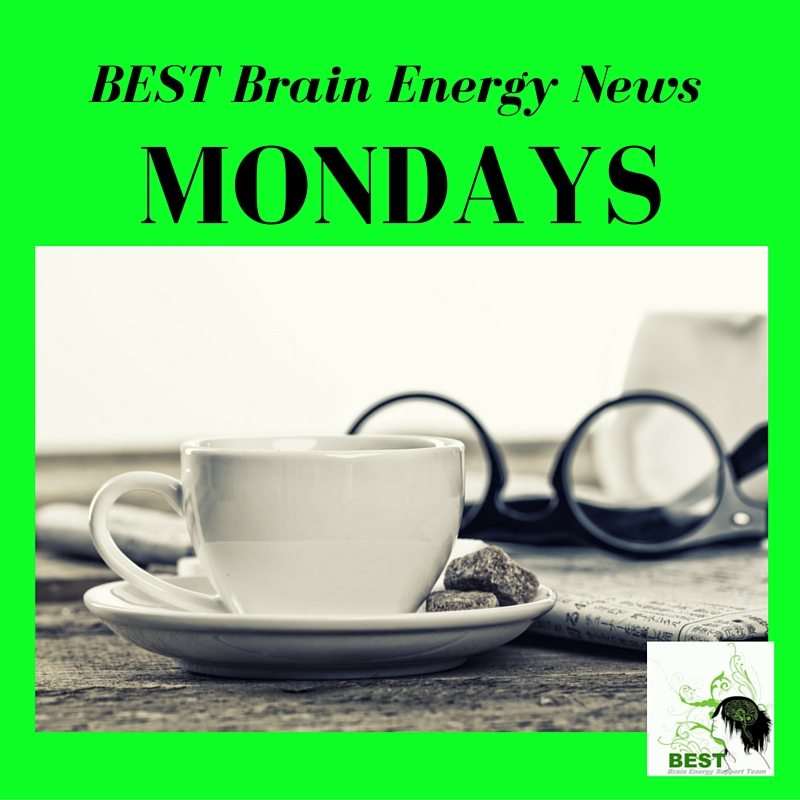 Here’s a great article that really captures the essence of living with an invisible/chronic illness or condition. While it was written by a woman who has lupus, it definitely is applicable to the brain injury community, too. Check it out by clicking this LINK.

Brain Energy Support Team (BEST) Founder and Chief Visionary Officer, Penny Condoll, was honored yesterday for her outstanding contributions to the community by U.S. Senator, Patty Murray,  at the 20th Annual Golden Tennis Shoes Awards Luncheon held in Seattle.  This prestigious award recognizes individuals who make a difference in the lives of others and their communities. 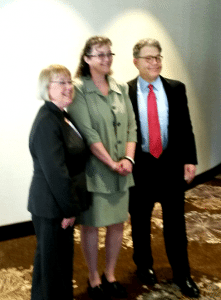 Condoll, who founded BEST in 2007 in an effort to better support individuals with brain injury like herself, has been a passionate leader, advocate, supporter and mentor in the brain injury community in Washington State.

She is honored and humbled to be recognized by the senator.

“I am so honored to be a recipient of the Golden Tennis Shoe Award,” says Condoll. “I am so impressed with the work that Senator Murray does for Washington State and for our country and to be recognized by the senator is really amazing.”

Condoll continues, “What’s even more amazing, is the brain injury community itself. I see many people with brain injury, each and every day, contributing to their communities, making a difference in the lives of others and striving to live the best lives possible.

Over the last decade, together, we have changed the face of brain injury. I am deeply proud to be a part of this community and so in awe of the beautiful work our community is doing to build awareness and support for others.”

Condoll is also quick to pay homage and give thanks to the “BESTies,” whose determination, energy and spirit inspire her every day. She dedicates the award to them. 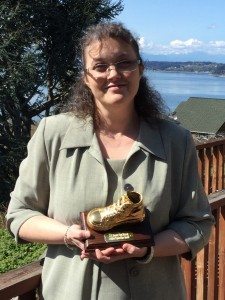 Condoll’s work, along with her fellow BESTies, over the last eight years speaks to the award’s meaning. The essence of Golden Tennis Shoes Award captures the spirit of an ordinary person doing the extraordinary in order to help and support others, something Senator Murray holds dear.

In fact, the award’s title itself was the result of Murray’s personal experience before she entered politics. In the 1980’s,  Murray, a concerned parent, went to Olympia to advocate for a local preschool program targeted by state budget cuts. A state politician at that told Murray that she couldn’t make a difference because “…she was only a mom in tennis shoes.”

That “mom in tennis shoes” went on to not only save the preschool program, she funneled her passion to give Washington families and citizens a voice in her subsequent roles as a school board member, state senator, and now today, as a long time member of the U.S. Senate. 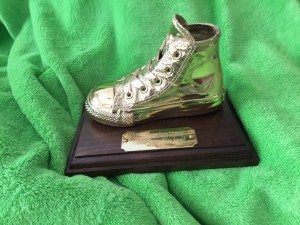 Condoll dedicates this award to the BESTies.

Here at the Brain Energy Support Team (BEST), we strive to bring you interesting and engaging news stories, articles, links and stories that you can use.

As we kick off Brain Injury Awareness Month, here’s just a sample of some news stories and information making the rounds locally and nationally.

Former Seattle Seahawk player, Sidney Rice, recently announced that he is donating his brain to science. The retired football player has suffered 10 concussions and he wants scientists to be able to see what happened to his brain in order to help others. Read the story, here.

Homelessness is a growing concern in Seattle. As the brain injury community knows, there are many individuals who are homeless who happen to have brain injuries. Read this recent, in-depth report on the state of homelessness in our local area.

Read about the strength, courage and determination about a young college student who won’t give up on her dreams.

Here’s a brain injury event happening in the other Washington.

The fine folks at Love Your Brain have a special focus on yoga and meditation.

Mia Dalene Marcum-McCoy  is more than a survivor.

The author, mother of two, philanthropist and renowned raw food chef is also an individual living with a traumatic brain injury. And while by definition, she “survived” some challenging experiences and events, she took her healing and life path on an unexpected but extraordinary journey.

She learned to sing.

And we are not talking the kind of singing we do with our voices. Instead, Marcum-McCoy sang from her soul and her experiences, all of them, good and bad. She embarked on a journey to find ways to heal her body and her mind; it is with that journey that she discovered that her future would not be limited by her brain injury. Instead, she found the purpose to a new life, new dreams and new experiences.

Now, Marcum-McCoy wants to share her understandings and experiences with readers while supporting the good works of organizations that support individuals with brain injury, their families and caregivers.

“Phenomenal Brain Power: From Brain Injury to Brain Awakening,” is the recently published and  inspirational account of Marcum-McCoy’s powerful journey of regrouping after injury and preparing for a new life of hope and possibility. Prepare to be inspired, as Marcum-McCoy chronicles her challenges and triumphs, with courage, tenacity and optimism (there’s even some amazing recipes included, as an added bonus).

In addition to provide a healing salve for others, Marcum-McCoy’s book takes it a step further. Proceeds from the book and other products sold on her website, PhenomonalBrainPower.com, will go to benefit people living with brain injuries, their families and caregivers.

The Brain Energy Support Team (BEST) is thrilled and honored to announce that Marcum-McCoy will be on hand at the BEST Learning Center on Friday, March 6, 2015 at 6:30 p.m. for special dessert and coffee reception open to the general public to talk about her book. Books will be available for purchase at the event and the author is pleased to sign copies.

Please RSVP by March 3, 2015 to kimt@brainenergysupportteam.org to reserve your spot for this event.

There is no cost to attend.

For those who would like to purchase a book now and learn more about Marcum-McCoy and PhenonmonalBrainPower.com, click HERE.

Marcum-McCoy is also featured in the short video below. Check it out with the link below and learn more about “Phenomenal Brain Power: From Brain Injury to Brain Awakening.”