Remember a few posts back when I said that the rain against our trailer felt more like “running through puddles during a summer sun-shower”? Well, not yesterday. It was more of the “Red sky at morning, sailors take warning” kind of rain. The day started with “batten down the hatches” followed by us out in the rain rescuing our fallen awning and ending with the wind hurling pine cones and other tree debris at our tiny (and sturdy) home.

The upswing of a windy, rainy, dark and stormy day is that we had everything we needed to enjoy our time together and get the work done. It was, after all, Tuesday. One text message to change my chiropractor appointment to another day. Another text message to change a meeting location from our office in University Place to an online video conference. And … well you get the picture.

Even losing power yesterday evening did not stop this dynamic duo. Fridge on propane (try doing that in a typical suburban house). Candles were easy to find and light. Stove, hot water heater, and furnace don’t need electricity. Computer batteries were full and all devices charged. The best part was we didn’t lose internet the way we use to when the power went out in the house. Our Verizon MiFi connection stayed strong so we didn’t miss a beat, which was important because Penny was working on our online courses for the new year and I was in a meeting at our BEST office in Second Life with a colleague in Connecticut.

All in all, yesterday was proof that we can meet any challenge so long as we do it with flexibility and a smile.

Today was the Veteran Stand Down event in Aberdeen. The South Shore Mall was alive with community spirit and the outpouring of appreciation these folks have for their veterans. Barb set up a terrific table representing the Grays Harbor Brain Injury Support Group and we had many opportunities to meet people and connect with vets. Many state agencies and local organizations provided resources and much needed items free to homeless veterans.

A big shout-out to the Grays Harbor community, Barb, Wil, and everyone who participated in this event.

A special thanks to Richard for the signed photo. Your service will not be forgotten by us.

If you don’t have a Stand Down event in your community check out this guide, https://nchv.org/index.php/service/service/stand_down/.
Partner with the American Legion and others to start one. We all know there are homeless Veterans in every community that need our support.

We’ve been here a few days and I it’s time to catch you up on the happenings of late.

Fri 10/23
As always, our love of adventure set the tone for an enjoyable three and a half hour drive from Seattle to Ocean City. I’ve never been to Grays Harbor and was certainly looking forward to spending time exploring and connecting with Barb and our TBI friends. Driving through Aberdeen and Hoqium with r-Destiny wasn’t as bad as we thought through it was going to be. Though 101 wound its way through urban(ish) neighborhoods we hadn’t any worries. Google Maps was our stalwart hometown guide.

Once parked and set up we settled into a quiet supper and rain. I love the sound of rain on the roof. The regular patterns are like a drum beat; a heartbeat of the nature that surrounds us. When I lived in NY I enjoyed listening to CDs of “nature sounds.” Rain and ocean were always such comforting loops. I also loved the rain when it tapped against the windows of my house or swept across the roof. Here, though, it feels different. I feel closer to it. It feels more a part of me like running through puddles during a summer sun-shower.

Sat 10/24
The beach! I grew up on the East Coast and loved spending as much time as I could in/on/by the water. We had a break in the rain today and off to the beach we went. We took pics and walked along the water.

Even though the Pacific is very different than the Atlantic (yes … it rolls into shore differently, the sand is different, it even smells different) I had a great time.

Mon 10/26
Today we spent the day with Barb around a campfire. Penny and I love these opportunities to spend with facilitators and friends across the state on their home turf. We learn so much as we share ideas, experiences, challenges, laughter, and even some tears. After hours of conversation, planning, and a pile of firewood Barb was ready to head home and I was ready for supper. :-)

Tue 10/27
Penny & I spent the day exploring Ocean Shores. While there isn’t all that much to see on a rainy October day we stopped in at the Ocean Shores Interpretive Center to learn more. The pic is from Google. It was way too grey and rainy for my shots.

Things that stood out? Pat Boone, Sand Dollars, and a video with the warning “don’t drive anything out onto the beach you’re not prepared to lose.” After a little digging I found out that Ginny Simms (popular 1940s Big Band singer and her husband are credited with founding Ocean Shores. Her nightclub was the second commercial structure to be built in town and it attracted the Hollywood set throughout the 1960s including Pat Boone, who became a permanent resident. How’s that for cool trivia?

Here’s another, there is no hunting in Ocean Shores. That means the black-tail deer population is HUGE! We saw so many this past weekend we started counting them; 11 on Saturday and 23 on Sunday, and six around our truck when I came out of the store.

We would have liked to walk the Interpretive Trail, but that will have to wait until the rain breaks … maybe next visit.

Fall is settling in all around us. The days are still warm and the nights are getting cooler. We have a great furnace in r-Destiny and it takes the morning chill off while coffee is perking on the stove. To be honest, we’d gotten so accustomed to automatic drip coffee that we almost forgot how rich and indulgent fresh perked coffee tastes. Yep, we’re coffee lovers. Brain function doesn’t kick in until our second cup.

We’ve learned another road lesson …. connecting to the internet isn’t all it’s cracked up to be at these parks. Thank goodness we’ve got a great data plan with Verizon. If you’re an RVer and have suggestions, please let us know.

We’ve been enjoying our stay at Lake Sawyer and spending time with our BESTies between Tacoma and Seattle. I can’t thank our volunteers enough for all they do to support us at Our BEST Space while we’re on the road.

Next stop will be Thunderbird RV Park in Monroe WA. Snohomish County, here we come!

Our travels in July taught us we packed too much into r-Destiny. The overall weight was good, but we just had too much stuff. August was focused on storing the rest of our stuff from the house and adding the “extras” from our pod.  Needless to say, a week at Dash Point for the Western WA TBI Camp and a couple more weeks at Longbranch were just what we needed to see how little we really have to have with us.

September was a wonderful adventure across WA for the People First Conference and the TBI Symposium with stops along the way to visit with brain injury facilitators in Cle Elum, Ellensburg, Yakima, Moses Lake, and Spokane. We spent time sharing ideas, learning a lot, and simply enjoying the company of great friends.By the way, if you’re passing through Cle Elum we recommend the Cle Elum Bakery and Owen Meats (the candy store for carnivores).

We rounded off the trip back to Tacoma with Penny’s participation in the CDSME Technical Assistance Conference and sharing time and information with our BEST partner HeadStrong at the Pediatric TBI Conference in Seattle. Wow!

What did we do when we weren’t presenting, talking, or attending conferences? Penny went fishing and Gloria read Rosamond Piltcher’s The Shell Seekers.

For BEST’s Founder and Chief Visionary Officer, Penny Condoll and Executive Director, Gloria Kraegel, getting out on the road to connect with other BESTies, support groups and the other terrific folks in our community across the state of Washington, is simply the BEST.

Last week, our dynamic duo headed eastward to Spokane to take part in the 36th Annual People First of Washington Convention.  At the convention, both women savored the time spent in great conversation and activities. Click to catch a few photos and recap of the event, here.

In this post, the gals wanted to share a couple of pictures on the journey getting there for your viewing pleasure.  Stay tuned for more to come! 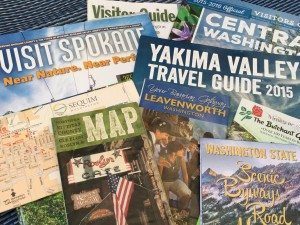 Research materials for the grand journey. 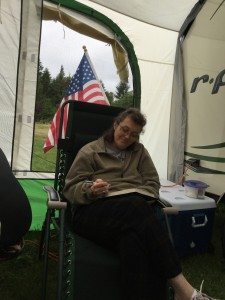 BEST Founder and CVO Penny Condoll relaxing at the campsite. 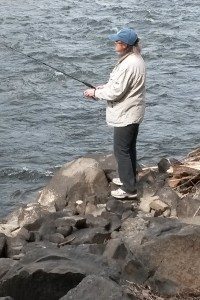