Home » About Us » Executive Director’s Message

June is an exciting month and a time when two communities celebrate their stories, struggles, and triumphs.

In July 1969 police raided the Stonewall Inn in New York City. Raids were common in those days, not just in NY but across the country. While many think Stonewall was the first riot by the gay community, it wasn’t. There had been riots in Los Angeles and San Francisco before New York, but for whatever reason, the week of riots resulting from the raid of the Stonewall Inn became the catalyst for what turned into a movement.

The other important observation in June is Juneteenth. June 19th is significant not only because it marks the day Black people in Texas learned of the Emancipation Proclamation (2½ years after it was signed), but because it continues to share the ongoing story of the Black experience and continued struggle in a country determined to forget. 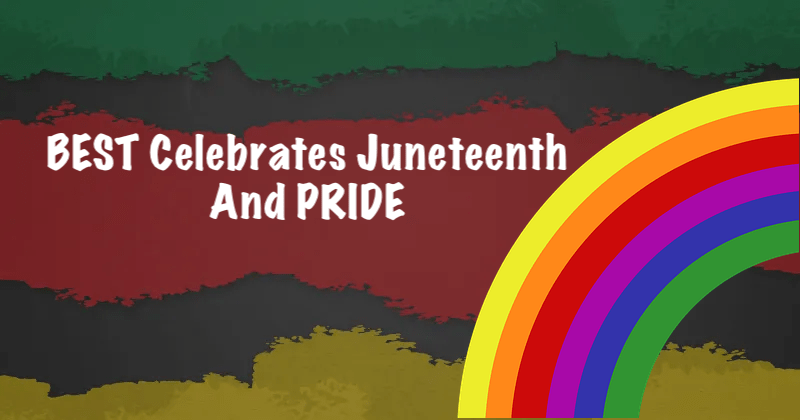 Since I started writing a regular letter to our community I’ve focused on what is best about BEST; the things I’m most proud of. The one thing I am probably most proud of is the way everyone at BEST has embraced, supported, and lifted up everyone in our community regardless of circumstance, gender, race, or background.

Since the 1970s and the start of the LGBTQ+ movement, hundreds of independent Pride events have sprung up worldwide. Similarly, there are hundreds of Juneteenth celebrations across the US. Over the years I’ve participated in many Pride and Juneteenth events. Sharing the stories of others makes us all strong.

But why is it important? And how does it have anything to do with BEST?

Both of these statements resonate with me because not only have I stood out and stood proud of who I am, but as a part of BEST I have had the great honor to support an amazing community over the past14 years; standing up and speaking out with pride for the rights and protections those with brain injury deserve.

BEST has formed alliances with those of many neurodivergent communities to proudly say that we may be different, but we are not less. This is an important message that we will continue to share. Our processing center may not work as yours does, but it can still do so much more than is often acknowledged, especially by many professionals and medical providers.

“When I liberate myself, I liberate others.” This message of strength, pride, and deep understanding of connectedness has been the message of the Black community not only from the 1960s, but for more than 200 years, and has been an important part of the LGBTQ+ community over the 50 years since the Stonewall riots.

Like the LGBTQ+ and Black movements today, our focus should be on holding our community up with pride and the commitment to overcome the barriers neurodivergent populations face every day. Access to quality healthcare, healthy food, safe and affordable housing, and reliable transportation should be available to everyone. Unfortunately, those with disabilities have a greater challenge accessing these services. From navigating convoluted systems to getting on a bus. Appropriate support and services need to be established and maintained so all of us can live rich, peaceful, and fulfilling lives.