(Editor’s Note: On this very day, two years ago, Isaac Peterson submitted his first article for this blog. Today, Isaac celebrates that milestone in the essay below.

Since the beginning, Isaac and I quickly developed a fast and terrific friendship and working relationship. Isaac’s work has graced these pages with many personal essays and  articles over that time. He writes with heart, grit, and humor; a perfect combination.

On behalf of the Brain Energy Support Team (BEST) and BEST readers, thank you for your time, talents and words. You are the BEST. KT). 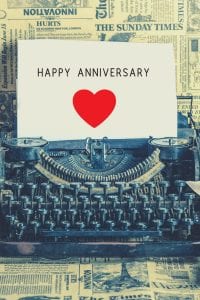 When I started contributing writing to this blog, the only thing I knew about traumatic brain injury (TBI), was that I had one and I wasn’t having any fun with it.

I started to attend a support group very soon after the stroke I had experienced, and Jeff Hartson, the support group facilitator, seemed to see something in me. I had no idea what; and soon, he began urging me to write for this blog.

At that time I really didn’t want to do it. I had no idea what I would say that was interesting–I don’t really view myself as being very interesting.

And there are so many blogs out there, who would care what a guy with a brain injury had to say about anything? Besides that, I didn’t really have it together enough to string together coherent sentences or the strength to work a keyboard.

But I gave it a try eventually, and to my bewilderment and surprise, Kim Thompson, my editor, seemed to like what I had written and encouraged me to continue writing.

Jeff and Kim came to occupy important spaces in my new life as a TBI survivor. You can either credit (or blame) those two for turning me loose on the world.

In spite of having no idea what to write or even how to begin, I’ve been at this now for two years, for the most part writing one entry a week, sometimes more, sometimes less.

In that time, my confidence has increased by leaps and bounds. My great surprise at the success of this blog writing has never gone away.

Contributing to this blog has been key to my recovery. Since I had to keep coming up with topics to write about (I could only write about myself for so long, after all), I turned to doing research about TBI and then writing about what I learned. I can only hope people reading my words have learned some things along with me.

I’ve tackled a lot of topics over the last couple of years, both serious and humorous, and at every step along the way, I’ve learned a lot and begun to make friends with my brain again.

I have encountered some very kind and beautiful spirits, people who have reached out their hand and offered me encouragement, praise, and best wishes for my recovery.

I was nominated and accepted for membership on a statewide team proposing improvements for and providing information to Washington’s statewide social services agency. That came because of this blog; one of the honchos on that team spotted me in a coffee shop, came over and told me that something I’d written had helped him. And he wanted me on the team.

This website blog was ranked as one of  the top  TBI blogs–IN THE WORLD—another big surprise.

And just think–I didn’t even want to do this at first. Go figure.

All this, and more, were only possible because of the visibility this blog gives me. Sometimes I feel almost famous, almost like a rock star. If I’d had any idea it could be like this, I might have tried to have a stroke sooner. But the one I did have was quite enough for now, thank you.

Because of my situation, and your support, I feel I have a fine future ahead of me, and the only limits on that are the ones I impose on myself. All because I decided to bow to pressure and write for a TBI blog.

I would like to give the people at BEST, a special thank you for hosting this blog in the first place. I encountered these exceptional folks not long after my time in the hospital. They have been a real beacon of hope in my recovery and have provided a bright and shining path out of the darkness I’ve felt at times. They have helped an awful lot of people besides me and the world would be the poorer if they weren’t here. They really are the BEST.

But I think the greatest honor is that people like you keep coming back, and I think that has been a key factor in my recovery. One thing all of you have encouraged me to do is to make the best of my condition, to stay positive, and to continue to provide a safe, supportive space for anyone with a traumatic brain injury and the people in their lives. It’s because of you, and people like you, that I’ve been able to come to grips with my new life as a TBI survivor, and for that you have my eternal and undying gratitude and appreciation.

I am constantly told I am a role model and an inspiration because of the words I write. That’s a huge thing for a retired party monster like I was.

As long as you keep coming back, I’ll try to keep pretending to be interesting. It’s been a great, phenomenal two years and I’m happier than I can say that people like you have been along for the ride.

Here’s to the next two years, and here’s hoping it will continue to be onward and upward for all of us.

So Happy Anniversary to me. I’m hoping there will be many more.