This month, two years ago, Padilla, along with other BESTies, participated in the Independent Living Rally in Olympia, Washington. Here’s what that day meant to Padilla.

“I have been an advocate for people with disabilities for many years,” says Padilla. “That particular day, I was feeling like ‘my old self,’ in a way that was empowering. It took several years for me to get the strength and courage to go out into public and be seen as an advocate and someone with a voice. I had the courage to show up and be noticed. I had the confidence and awareness that I was making a difference.”

For Padilla, making a difference is something at the very core of who she is.

“I have always been one to make a difference. I love helping others be empowered and make a difference in their own lives,” say Padilla. “Being there and supporting (fellow BESTie) Katie, as she spoke her truth to the crowd was exciting and very emotional. I was very proud of her!

That was the first of the BESTies for me: (Fellow BESTies) Katie, Jeff, John, Austin and his mom, Coni, Penny and Gloria. This was the one of the first BESTie outings.

We were united and advocating for living independently. We wanted to be heard. We didn’t want any budget cuts to take place as it would affect people with disabilities medication, mental health, food and shelter, along with the most important aspect, caregivers that support us as we live independently.”

For Padilla, her sign said it all that day. 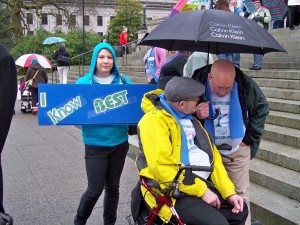