One of the joys of having a traumatic brain injury is that the things you easily did before, and without thinking about, can seem impossible after the injury.

I’ve mentioned before that one of my challenges early on was tying my shoes.

My coordination was gone, I had lost strength in my fingers, my dizziness would make me pitch forward and almost fall on my face. It could take a few minutes just to tie my shoes. All I could figure out how to get past it was to wear slip-on shoes. I tried hard to think outside the box, so to speak, and come up with new and different ways or workarounds to get other things done.

But since no two brain injuries are alike, you probably won’t have all the same issues or solutions as me or other TBI survivors.

So what do you do?

I just had an idea for something that might have helped and I wish I’d thought of it back then.

Have you ever heard of lateral thinking? 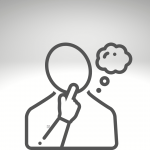 Lateral thinking is kind of hard to explain, but here’s a short simplified description of it.

With regular, conventional thinking, people tend think in a kind of linear way that might be diagrammed as Step A, then Step B, Step C, and so on in order.

This is called vertical thinking.

Lateral thinking doesn’t take that kind of head-on, conventional way of thinking. Lateral thinking attacks a problem from the sides, instead of straight on in logical steps. It can start from the same place, but lateral thinking turns the problem on its head, keeping the end goal in mind, but following entirely different and unconventional steps to get there. It what’s called thinking outside the box.

I remember a time in third grade when I showed my father an arithmetic test I had taken in school. He singled out one problem on the test and said, “You did this wrong, but you got the right answer.”

Later I thought, if I got the right answer, what was wrong with how I did it?

Lateral thinking is like that—if you arrive at a workable solution not using the way people think of as the right way, you’ve still found a way to get the result you wanted. Don’t let yourself get bogged down getting caught up in the way you always did things; understand that there is more than one approach that will work with many problems. There are definitely wrong ways to approach problem solving, but there also definitely other right ways, and often more than one path to solving a problem.

This is an exercise you might have seen before. It requires lateral thinking to solve: connect all the dots using only one continuous line, without lifting your pencil and without retracing any part of the line.

And here are some examples of lateral thinking you can see for yourself, of people being innovative in solving every day problems. They’re called life hacks and some of the solutions will have you thinking, how come I never thought of that? It’s so simple! You can see some examples of every day life hacks here and here. More life hacks can be found on YouTube or through a search engine search.

I hope you picked up something here that might help you make it through that really tough part of having a brain injury, or something that will help in your life, even if you don’t have a TBI.