Home » Our BEST Stories » Setting and Achieving Goals: A Guide from Isaac Peterson 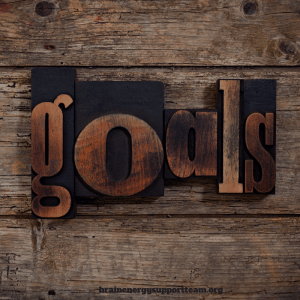 We’ve got some months of 2018 behind us now. How’s it been going for you so far?

Did you make New Year’s resolutions for yourself? Did they work out for you? Are you still working on the improvements you set for yourself? I assume you resolved to make yourself better in some way, since it makes no sense to resolve to make yourself worse or more negative. We hear about people on their deathbeds expressing regrets about things they should have done in their lives, but we don’t really hear of them saying things like, I really should have tried harder to be more of a selfish jerk.

The good news is that we don’t need to make resolutions at a particular time; we can resolve to change any and every day.

Let’s not call those resolves to change, resolutions; let’s call the process goal-setting, since that is the reason for making resolutions, to set new goals for ourselves. And if you have a traumatic brain injury (TBI), you almost certainly have some goals.

I know I sure have, and overall I’ve seen some success; but I still have a long way to go to make a complete recovery.
There are a lot of good websites out there loaded with good insights about setting goals–but I’m not going to rehash what they say since you can read them on your own without me.
But I will tell you some things I’ve learned about setting goals that seem to work great for me.
First, I find positive mental imagery to be extremely useful–in fact, I find it crucial and necessary. 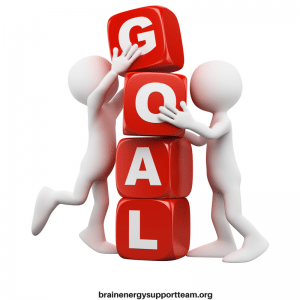 First off, you have to set specific goals. Let’s use losing weight as an example of a goal. To begin with, don’t expect great results just by saying, I’m going to lose weight. How much weight do you intend to lose? By what date? What do you intend to do to lose the weight in that time frame? I find it helpful to make mental pictures of what it will look like when I’ve met my goal, and to imagine how great I will feel when I meet it.

But that first requires that I have a good idea of what I will need to do to get there, to break it down into a series of attainable goals that, added up, will help get me to my goal.

Then you have to visualize how you’re going to do it: Exercise? Diet? A combination of the two? Some other method? However you decide to do it, visualize yourself doing it. Whatever goal you set, stick to it and let your mind take over–whatever you tell your mind you want to see, it will make sure it happens. It will give you the drive to follow through. In this case, see yourself taking the steps you decided on, standing on a scale in 30 days, and seeing the scale showing you lost five pounds.

Lather, rinse and repeat as necessary as they say. If you’re doing it right, you should see yourself hitting your 30 pound goal in six months or so.

And think how good you will feel the first time you lose five pounds according to your plan. I guarantee you will feel all psyched up and want to keep it going. That’s just the first step. What I believe in is setting yourself up to experience a series of small victories on the way to your goal. You will want to keep winning, and before long, you will expect to keep winning, and you will rack up a series of small victories until you get where you want to be. Just make sure to keep it realistic and not expect it to happen overnight.

But if you don’t quite hit five pounds, don’t worry and don’t give up; just revise your goal. If you only lost three or four pounds, just change your target to that; after all, you’ve already lost that much weight so you know you can do that much; just keep doing that and you will get there.

And that raises an extremely important point: not hitting your goal does not mean you have failed and it does not make you a failure. It probably just means nothing more than that you need to reset your goal. Don’t beat yourself up over it, and don’t consider yourself a loser. If you’re doing your best, just keep going. A lot of people who have quit smoking will tell you the same, that it took several tries before they did it; they just didn’t give up trying.

You can only fail if you don’t try or if you give up trying. Keep going, restart if you need to, but keep trying and eventually you will get there. No matter what, give yourself credit for making the effort; you may not always be able to completely control the result.

I think another thing to keep in mind is an obvious one: how committed you are to reaching the goal. But how do you define commitment? Here’s kind of how I look at commitment: If a huge fire breaks out in my home, I am getting out of there some kind of way, even if I have to jump out of a second story window to do it. I just know that I am going to survive somehow. I am committed to the idea that I will find a way out.

How committed are you to achieving your goals? Going back to the weight loss example, if you are thinking, it sure would be nice if I lost weight, you probably won’t lose weight. It is necessary to have a specific goal fixed in your mind, to do the things you need to do to get there, and to commit to STICK WITH IT.