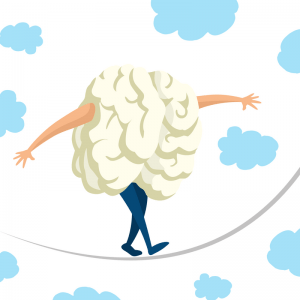 Pretty much every day, it seems someone is telling me how remarkable or phenomenal my progress since my stroke is.

And it seems every time I start feeling good about my progress, something happens that sets me back a step or two.

The latest thing was a seizure, just to remind me that even a year later, a stroke is the gift that keeps on giving.

I didn’t know I had had the seizure. A couple of Sundays ago I laid down in the afternoon to take a nap, and when I woke up, my roommate and the owner of the adult family home where I live were hovering around, concerned, telling me I’d had a seizure.

I felt great, though, and it was really weird–the weakness and unsteadiness in my legs was gone. For awhile, I could walk with much of the strength and steadiness I had before my stroke. But it didn’t last. Things quickly got back to normal, or at least what I’ve gotten used to over the past year as normal.

Luckily, soon after the seizure, I was due for a checkup with a neurosurgeon. I wrote about my previous visit which was in April. At that meeting, he told me the AVM (arteriovenous malformation) in my head was really rather large, and he had some hesitation about performing a surgical procedure, which he considered too risky, and to which I agreed. He also didn’t think the AVM had caused my stroke and wanted to see whether getting my blood pressure under control might be the key to preventing another stroke.

We had set the followup for six months later, which turned out to be just a few days after the seizure.

So at the end of November,  I went back to see him in Seattle.

An MRI was the first thing on the menu. I don’t know if you’ve ever gone through an MRI; all I’ll say about it here is I am glad it’s over with.

The neurosurgeon told me he still opposed surgery, which was good news. But he said he was putting me on an anti-seizure med, which I’ll have to take, if not the rest of my life, definitely a large part of it.

This wasn’t good news, as I intend to live forever, or die trying.

Taking another medication twice a day isn’t in itself that big a deal. The side effects of this one, though, are exactly zero fun. This anti-seizure med causes drowsiness, lethargy, and dizziness. Lethargy and dizziness I already had more than my share of, but this stuff gives them to me in spades. The drowsiness has lessened somewhat in the couple of weeks since I started taking the stuff, so I guess that part is all right. But it also makes me feel not that sharp mentally much of the time. It has been a real challenge writing this, and has taken much longer than usual. I’m pretty much all right, but not “all there” all the time.

All I know is that I’ve just been handed yet another reminder that a stroke ain’t no joke.