(Editor’s Note: Writer and stroke survivor Isaac Peterson shares his love of music, before and after his brain injury, as well as the positive impact it’s made on his recovery. Enjoy this two-part series! KT)

By most accounts it seems that the rapidity of my recovery from a stroke so far has been pretty remarkable, at least judging by the number of comments I hear all the time.

I like hearing that my improvement is something people can see, but it’s not happening all by itself. I credit my progress to self-care. I’ve talked about what I do for my own self-care program but I haven’t really said much about how I think music has been part of my recovery. It looks like I’ve discovered my own form of music therapy.

I’ll explain how I currently use music in my personal self-care program, but something is making me want to talk first about how music has been a big part of my life. I think I’ll have to do two blog entries, the first one about then and the next part about now.

I’ll skip over the part about my early addiction to popular music on the radio. I could write books about how much I was into that and my addiction to the radio as a teenager.

I will say, though. that my intense interest made me want to be a musician as far back as elementary school. But my parents wanted me to focus on school and didn’t want to pay for music lessons anyway.

I did get my father to spring for a portable keyboard eventually, an electronic organ that folded up like a suitcase. It didn’t take long before I figured out how to play by ear. By the end of high school I had taught myself songs like A Whiter Shade Of Pale by Procol Harum (turns out it was based on a piece by Bach called Sleepers Awake).

But when I started college, I couldn’t have my organ in my dorm room, so I took up the guitar. I learned a few basics then proceeded from there to playing by ear, as I had done before on organ. For years I pretty much only played when I was alone.

Then after I got my bachelor’s degree and moved to Minnesota, I finally started playing in bands. My first real band was called the Reactors (I never liked that name but I was outvoted by the other guys in the band. I can’t remember the name I wanted–it might have been the Dust Bunnies or Iron Grease Sucking Machine or something.)

The Reactors was a band that would play anywhere, any time, partly to get our name out there, partly to try to make a little money (and the money was very little). We played parties, a wedding once, a few corporate gigs, and lots of bars.  The thing I liked most about the Reactors was that we played mostly our own original music but I didn’t contribute much at first. 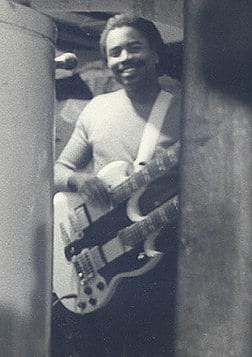 The author and his double-neck guitar (courtesy photo)

Then I got the double neck guitar you see in the picture on the left.  The bottom neck is six-stringed. the top one has twelve. I really wasn’t that good a guitarist until that point; that guitar seemed to open up something inside me and my playing took off. Sometimes I felt like I could fly while I played it. I got my hands on an old surgeon scrub outfit and dyed it black. That outfit and guitar was my calling card. Some people called me Guitar Doctor.

And I finally started writing music.

The very first music I ever wrote was called Dancing With A Mannequin. The keyboard player and the bass guitarist wrote the words to it, but the music was all mine, and it was a real crowd-pleaser. It got so that women would come up sometimes to dance with me while I was playing it–not that I ever complained.

People would come see us just to hear  that tune and would holler out, Play Dancing With A Mannequin!

That tune was a real workout for the band and became our signature tune.

But we never made much money; I always had to have a day job. We never did put out any recordings. Sometimes somebody would ask me if we had a record and my standard reply was, Yeah, we got a record–most consecutive gigs without gettin’ paid.

People loved us and other bands hated to have to come onstage after us. We always had enthusiastic audiences but our problem was that we couldn’t be easily categorized, and people running venues and signing bands to record couldn’t classify us, so the only people who knew us was our cult following and our friends.

I look back on those days with fondness. As I said, I never made much money playing music but it was good for my heart and for my soul. At least I won’t be an old man wondering with regret what it would have been like to be in a performing band.

I told you all that to tell you this: That was a big part of the life of the pre-stroke me. I get prodded to get back into playing and I would but for two things: I don’t feel the need to do it any more. My new creative outlet is my writing. I find writing words and writing music to be similar processes. And the other reason is that since my stroke and TBI I just don’t have the strength, coordination, or dexterity in my fingers to play. I miss it, but at the same time I don’t. I can revel in the memories, but that’s what they’ll have to stay: memories. I can enjoy those memories but comparing my old life to my new one is a nonproductive game that would keep me from focusing on my new life and what I need to do with it. Besides, even though I kind of felt like a rock star when I was playing, the feedback I get from writing this blog makes me feel like a rock star all over again.

I can’t dwell on my past or have regrets about not playing, but I can look forward to the future I’m carving out for myself and focus on that. The first time I attended my support group I remember being asked about my prospects for recovery. My reply was this: I intend to recover–I still have amazing things left to do.

And I intend to do amazing things, like recover beyond all outside expectations.

All right. Enough about what I did musically in the past. Next time I’ll talk a little about how central music is to my life and recovery in these days and times.

The second part of this piece is coming soon to a computer monitor near you.

BEST loves sharing ...
0
« It Can Still Be the Most Wonderful Time of the Year
Music and Me by Isaac Peterson (Part Two) »