(Editor’s note: Writer and BEST blog contributor Isaac Peterson has come up with a creative way to spend his time at home right now; challenging himself with brain teasers. Try them out yourself below. KT) 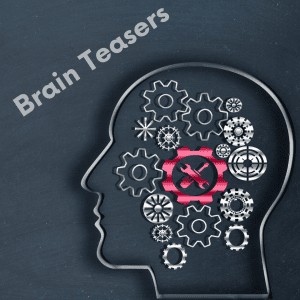 Like most people right now, I’m mostly stuck indoors having the opposite of fun.

Everyone who lives in this house is stuck in here with me, and all the people, and the sound that goes with it, is really giving my traumatic brain injury (TBI), a good working over.

How am I going to last without going stark raving loony from the sensory overload?

At least I like to read, and between books and the internet, I have plenty of reading material, .

Looking through my books for the next one to read reminded me of a book I used to own, and like, as a sixth grader. The book was called One Minute Mysteries and contained fictional situations and challenged the reader to come up with explanations for them.

Most of them weren’t really obvious, either. They took some real thinking outside the box; some of the answers would cause someone to do a face palm because the explanation was so obvious once you found out what it was.

Here are some one minute mysteries, I found, also called brain teasers (just the thing for people with brain injuries, eh?).

Want to see how many you can solve?

Each numbered mystery is directly followed by the answer.

1. Job Polish Herb
What do these three words have in common?

Answer: They are pronounced differently when the first letter is capitalized.

Answer: The catcher and the umpire

3. A sundial has the fewest moving parts of any timepiece. Which has the most?

Answer: An hourglass—It has thousands of grains of sand

4. Two children who were born in the same hospital, in the same hour, day, and year, have the same mother and father, but are not twins. Why?

Answer: They are two out of a set of triplets

5. A man is found dead in the desert, face down in the sand with a pack on his back. There are no footprints anywhere in sight. What happened?

6. In the old West a man rides into town on Friday. He stays for three days, and leaves on Friday. How can this be?

Answer: His horse is named Friday

7. You walk into a room with only one match. You must light a lantern, a gas stove, the pilot light of a water heater and a fire in a fire place. What do you light first?

8. There’s a two story house. Both the front door and the back door are open and all the down stairs windows are open but a man is locked inside the house. How?

Answer: He is on the second floor

Answer: He is playing monopoly

10. A burglar robs many homes throughout the day. At the last house, he breaks in through the back door. This house has more valuables than any of the other houses, and nothing is there to stop him from taking them, but he doesn’t take anything. How come?

Answer: The burglar was breaking into his own house because he&#39;d accidentally locked himself
out.

11. Bob and Carol and Ted and Alice all live in the same house.  Bob and Carol go out to a movie, and when they return, Alice is lying dead on the ﬂoor in a puddle of water and broken glass.  It is obvious that Ted killed her but Ted is not prosecuted or severely punished. Why not?

Answer: Alice is a goldfish and Ted is a cat.

Answer: White. The only place you can hike 3 miles south, then east for 3 miles, then north for 3 miles and end up back at your starting point is the North Pole. Polar bears are the only bears that live there.

14. A man condemned to death has the option of picking one of three rooms. If he walks through the correct door his life will be spared. The first room is a furnace filled with flames. The second has armed men with loaded guns, while the third has lions that have been starved for years. Which one should the man choose?

Answer: The third room, because lions starving for years would be long dead

15. Your parents have six sons including you and each son has one sister. How many people are in the family?

Answer: Nine–Two parents, six sons, and one daughter. All of the bothers have one sister (not six sisters).

16. What 5-letter word becomes shorter when you add two letters to it?

17. How many times can you subtract the number two from the number fifty?

Answer: One. After the first subtraction, the starting number is 48.

18. In British Columbia, you cannot take a photo of a man with a wooden leg. Why not?

19. A truck is stuck under a bridge and the driver cannot get it out. A man walks by and stops to help. He easily gets the truck unstuck. How did he do it?

Answer: He let the air out of the tires

Answer: Nine. The others died

Answer: All of them.

23. Before Mt. Everest was discovered, what was the highest mountain in the world?

Answer: Mt. Everest. It was always the highest in the world, just not discovered yet

24. I can predict the score of any football game before it begins. How can I do this?

Answer: The score before the beginning of any football game is always zero to zero

25. Imagine that you are in a boat, in the middle of the sea. Suddenly, you are surrounded by hungry sharks, just waiting to feed on you. How can you put an end to this?

26. You are a cyclist in a cross-country race. Just before the crossing finish line, you overtake the person in second place. In what place did you finish?

Answer: Second place. If you pass the person in second, you take second place, and they become third.

27. In my town are three professional sports teams, football, basketball and hockey. One man plays for all three teams. Who is he?

Answer: The guy that plays the organ at all their games