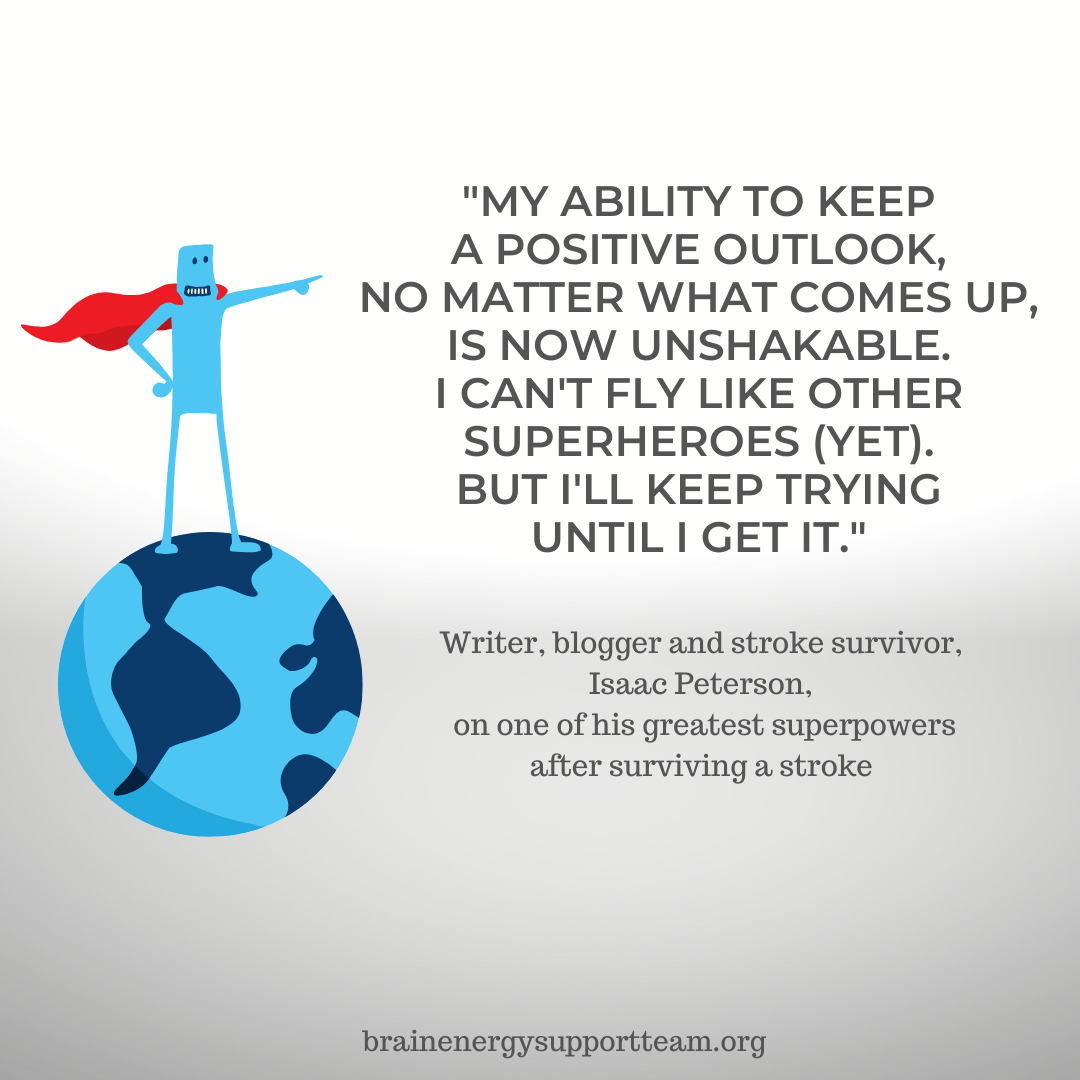 As my recovery from a traumatic brain injury (TBI) progresses I get closer and closer to being a real TBI superhero.

I think after I iron out a few details, I can get my TBI superhero career off the ground.

Let’s do a quick inventory of my superpowers. Let’s see….

Staring down a major stroke and living to tell about it is my main superpower. I’m glad I’ve only had to do it once, but it did leave me with other powers, too.

I have the power to get better every single day, day after day. It’s not as good or as quick as Wolverine’s healing factor, but it’s working great for recovering from a stroke. It’s an invisible power, though, and I can only make it work for me.

Another power I gained is the ability to sleep all night, with less and less downtime during the day. This one allows me to constantly recharge and keep on going day after day.

One power that’s still a work in progress is the ability to focus and concentrate for more than a few minutes at a time. I still have a ways to go with that one though. But my memory power continues to get stronger as well; I can now remember what someone has told me for more than 10 minutes.

One weakness I’m still working on overcoming is loud, continuous noise and bright lights–they really make my brain hurt. I’m still not completely comfortable with them but at least they don’t set off the check engine light in my brain so much. I’m getting better with it.

But my ability to keep a positive outlook, no matter what comes up, is now unshakable. I can’t fly like other superheroes (yet). But I’ll keep trying until I get it. I know that if I keep a positive image in my mind, I’ll be able to do it sooner or later; I can already jump pretty high. One of these days….

Super confidence in myself is now a power that is with me all the time and I can’t turn it off, no matter what. My confidence in my ability to meet and overcome new challenges is practically etched in stone. A battle isn’t over until I win it. I would sure hate to get into a fight with me.

Come to think about it, I’d have to say my greatest superpower is the strength of my will and the determination to keep moving forward.

The next order of business is choosing a superhero name. The way it seems to work is to pair an adjective with a noun.

There’s already a guy calling himself Superman so I have to keep looking.

I don’t know. Maybe I’ll have to give that one some thought.

I’m also kind of stuck for a costume idea.

One idea I had was to wear my underwear on the outside. Then I remembered I tried that once before, before my brain was injured. People looked at me the same way my dad did the time I told him I wanted to be a singing cowboy, so I don’t think I’ll go with that.

A mask or not? I like the idea of one that covers my whole face and head, but there’s already a guy swinging around on webs with one. His mask has webs all over it so that’s out. But it would be a defense against Covid-19 while I battle TBI.

I’m kind of leaning toward The Amazing TBI-Man (TM) for a name since I still manage to amaze myself regularly.