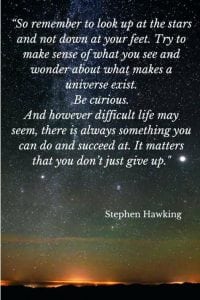 Okay, everybody. I’m back now from taking a break and giving my brain a chance to cool down a bit.

You might remember that last time, I described a regional TBI conference I attended, and that after hearing others describe their life’s experiences and challenges, I came to some realizations.This article is about three of those realizations. But before I tell you about them, let me give you some background.

I’ve written about the stroke I experienced in November of 2016. It was a major stroke, a very serious one (although I must confess I’ve never heard of a funny stroke). I apparently was in a coma for a while, and spent a month in the hospital in the acute care section. But I didn’t feel like I was stuck in there; rather, I felt like everybody else was stuck in there with me. I’ve always been kind of contrary like that.

I started planning my recovery while I was confined to that bed. I knew I was going to get much better; I HAD to get much better, because the alternative was never something I was ever able or willing to entertain, even for a minute.

Based on the severity of my stroke, the doctors seemed to believe that my outlook when I was discharged was on the dismal side. But I never believed that, or bought into it. They told my sister that I would need 24-hour-a-day round the clock care, that I’d need to have someone around when I went to the bathroom or the shower, that I’d need a walker; those kinds of things. None of them reflected the reality I chose for myself.

Although I still have quite a way to go, the way I chose seems to have me on the mend quicker than many of the medical professionals anticipated. But I had a seizure a year after my stroke; I wrote about it here in this space, and the new heavy-duty medication I have to take.

Still with me? Good, because now I can finally get around to telling you about the realizations I had after that TBI conference.

After hearing speakers talking about having to put their world back together, having to relearn how to walk, talk, or even how to make toast, it occurred to me that I didn’t have to go through any of that. No, my challenge wasn’t in relearning how to do basic things; my challenge was in finding my place in the world with my brand-new traumatic brain injury. The world hadn’t changed; I had changed. No matter how much I work, I am never going to be the same man I was before my stroke.

That man is gone forever.

How liberating that thought was! Instead of dreading my new journey or pitying myself that I don’t have the stamina that I did before, issues with my balance, the strength in my legs and arms and other physical problems, as well as problems with focus and short term memory; those problems will get better over time.

I am absolutely positive of that.

While I go about reinventing myself, I realize that I have total control over what to carry over into my new life and what to leave behind in the old one. Reinventing Isaac Peterson is a work in progress, and soon the upgrade–Isaac Peterson 2.0 will be let loose on the world.

(Actually, I’m not sure about the numbering on that, since the first time I was Isaac Peterson III. Maybe the new guy who looks like me would be Isaac Peterson IV. For now, though, I think I’ll stick with Isaac 2.0, who will no doubt be better than the prototype and a better upgrade than Microsoft ever put out.)

My brain seems to have made it through the stroke pretty much, as well as my verbal skills–how cool is THAT? That’s a major link to the old guy, and since we share the same basic experiences, I can look back and avoid the mistakes he made, and make better, smarter choices this time. I can cultivate new skills and interests and work on eliminating some old character flaws with my new perspective on things.

The second realization is about the seizure I had last fall. It seems to me now that it may not have been just a seizure. Looking back, I can see some changes in me after the experience. Since then, I have moments of what seem to be brilliant clarity, and I often find myself thinking in a way I never did before the stroke. And my intuition seems to have been bumped up a notch in ways that are beyond my ability to express in words.

It seems that, in a real kind of way, that seizure was actually my brain rebooting itself and realigning itself. I mentioned this to my primary care doctor, and he didn’t think it sounded as weird as it felt saying it. I hope I can figure out one day exactly what happened, because honestly, it feels kind of cool sometimes.

And now for the last realization; sometimes when I tell this to someone, they look at me as if I had just announced that I had been sent here from the future to save mankind. But here it is: I’m glad I had a stroke. I’m lucky it happened.

For one thing, I found what kind of stuff I’m made of, and it looks like I’m made of some pretty tough stuff. There are people who don’t survive a stroke of the type and severity of the one I had. And among those who do survive, there are those who didn’t get to bring their full mental and language faculties with them, and others who have much more difficulty with their motor skills.

My stroke forced me to change my outlook in ways I mentioned above. I don’t view my future in bleak or depressing terms, and I don’t feel sorry for myself. I’ve certainly never pitied myself. My life is going in a direction I never foresaw when I was the old me.

But before I go, let me make it clear that even though I feel lucky I had a stroke (or at least lucky to live through one), I sure don’t want to have another one. That much luck, I think, is more than enough for one lifetime.

But I feel absolutely convinced of one thing for sure: As I’ve said, my future will not be written for me; it will be written by me. My legs aren’t strong enough yet for me to run again, but my spirit and my will sure are. I’ve got another chance at this, and it’s entirely up to me what I do with it.

I’ll certainly be writing about the upcoming projects and opportunities I mentioned, as they happen. I hope you will all be here to witness the roll-out of Isaac 2.0. He is really going to be something awesome and worth the wait.

« Thank You BEST Guest Bloggers and Contributors!
Ready for a Picnic? »