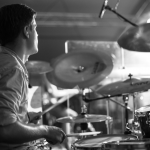 In his wonderful book, Stronger After Stroke, Peter Levine says that, in his experience, the brain injury survivors that make the best recovery are athletes and musicians.  The reason? Because they are used to doing, boring, repetitive’ tasks over and over again, measuring their slow, incremental progress. And this is what recovery is. Lots of boring, repetitive tasks with slow, incremental progress.  If you’re re-learning how to walk with incredibly bad balance, or re-learning how to grip something with your affected limbs, your mobility isn’t going to come back in a week or two, is it? No, it’s going to take time and effort. A huge amount of time and an incredible amount of effort.  But, as Louis Armstrong once said about playing the trumpet, What you put in, is what you get out.

Before my stroke I was a drummer.  So, my hours/days/weeks/years spent learning the Drum Rudiments (lots of boring, repetitive stickings, gradually building up speed, stamina and strength) has paid dividends for my stroke recovery.  The Drum Rudiments are the drumming equivalent of scales for a tuned instrument. Originally, there were 26 drum rudiments so imagine them as the 26 letters of the alphabet. You have to learn all the letters first, and then how to arrange them in different sequences to create words and, in turn, whole sentences. Same with the ‘Drum Rudiments’.  They are basically combinations of single strokes and double strokes (mainly). As an example, using R for the right hand and L for the left, something called a Single Paradiddle, would be RLRRLRLL, played evenly on a 1-2-3-4 count, and then faster and faster until it becomes a roll. And that’s just 1 out of 26.

As I say, lots of repetitive, boring tasks – just like recovery!

I thought about all this repetition and effort a great deal when resolutely following the various physiotherapy programs I was given.  Just how much physiotherapy do you need in order to reach a level where you consider yourself a functioning human being? And how long will this take?  (I see these type of questions often on Facebook brain injury survivors groups).

To answer these questions is highly subjective, of course. The level of mobility that I would like to achieve is different to others, as theirs is to mine.  As a musician and drummer, I would probably like more coordination and fine muscle movement in my hands that the average person. (Contrary to popular belief, drumming is all about dexterity and strength in fingers and wrists, NOT in the arms).  My days of playing sport are well behind me, so I don’t have the need to be able to run. However, a younger person than I might have a bigger desire to be able to run and so their objectives behind their recovery are different to mine.

So, how much practice do we need for our recovery?

Have you heard of the 10,000-Hour Rule?  In his book Outliers, author Malcolm Gladwell posits that in order to become world class at something, requires 10,000 hours of deliberate practice.  (Meaning that a structured practice, or training regime, is followed).

So, let’s apply the 10,000-Hour Rule to brain injury recovery.  Us survivors have brain damage, so our usual neural pathways have probably been disrupted or permanently damaged.  We need to retrain the brain to create new neural pathways (neuroplasticity) and, when we accept this, the enormity of the task ahead becomes clear.

I’m not suggesting that we want to become world class at any activity, just that to get to a reasonable standard (at anything) requires a great deal of effort over a prolonged period of time.  To put this in to perspective, if we assume a normal working week of 38 hours, and a normal working year to comprise of 48 working weeks (i.e. allowing for 4 weeks holiday each year), then 10,000 hours amounts to a full-time job for over FIVE YEARS!  Which is really what recovery is – it’s a full-time job – but very few of us can devote 38 hours a week to the task, mainly due to the limitations we have post-brain injury. (As an example, I reckon my average is around 5 hours a week. I’d love to devote more, but my fatigue levels just won’t let me).  A toddler learning to walk and then run with a good degree of ability takes years to do so and a lot of practice. Recovery is no different.

Looking at it another way, if this recovery thing was a hobby, and we could spend 10 hours each week practicing, then 10,000 hours now becomes just over 19 years.  Of course this is, in theory, to become world class.  But I think it is fair to say that if we apply these numbers to recovery for brain injury survivors, then we are talking about many, many years of effort and practice to try to regain mobility and function.  Day in, day out. Week in, week out. (And there are no guarantees, of course).  I would also suggest that it never ends.

As I mentioned earlier, the key to all this is neuroplasticity – the ability of the brain to generate new neural pathways.  Athletes and musicians often refer to muscle memory. This is wrong. There is no such thing – muscles do not have any memory.  What’s happening is that the activity being learnt is firing off neurons in the brain, and the brain is finding the most efficient route for those signals to pass through.  By repeating the activity incessantly, we are burning these neural pathways (the routes) on to our hard drive, so to speak. With enough practice the activity becomes automatic.  But it’s the brain’s memory, not the muscles. The muscles will become stronger and more conditioned, but they have no actual memory.

My simple message, then, to fellow brain injury survivors, is that you really have to put a lot of work in over a very long period of time before you start to see improvements.  (And, I have found, if you ease off what you are doing at any point you will slip back, so you have to keep putting the work in to maintain mobility).

Treat recovery as a job. It’s your life you’re trying to reclaim. So, not a bad job to have, is it? Even if it is unpaid!

So, 10,000 hours.  Five years of full-time work, or nineteen years of hobby time.  A sobering thought, isn’t it? In a world of instant gratification (download this song in a few seconds, order online today for delivery tomorrow, want it-buy it-got it), the idea of working towards very long-term goals – and the amount of effort required – can be hard to grasp.

Isn’t there a pill I can take and just be better?

It’s hard work and there are no short cuts.  My final message to survivors out there – use it, or lose it!