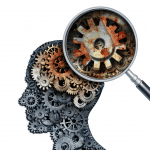 (Editor’s note: Writer and brain injury survivor, Isaac Peterson, takes a deep dive into brain injury treatments throughout history in his latest piece. Interesting is an understatement. Read on. KT)

Lately I’ve been wondering how traumatic brain injuries (TBIs) were regarded and treated through history.

What made me wonder about the past, is that now, in the present time, how TBIs are gradually gaining more public awareness and understanding.

Brains have been around as long as there have been people, so there had to be a lot of brain injuries through the ages, especially during the more violent times in history.

I found out some information checking out stuff with my Google machine about TBI through history. What I found makes me pretty glad that if I had to have a brain injury, at least I have it now and not in ancient times.

Here’s just a small sample of what I found.

There was awareness that head and brain injuries were a thing even in prehistoric times, as far as anyone can tell. Skulls have been found with not only fractures, but also with what look like drill holes. Speculation is those drill holes came from an ancient practice called trepanning, and it sounds like the treatment for TBI was worse than the TBI itself.

Trepanning was drilling holes in the skull and exposing part of the brain—before modern anesthesia. In ancient times it was known the brain had something to do with thoughts, but no one knew what or how. Mental issues were thought by some to be caused by demons or evil spirits, and trepanning was thought to be a way to release the evilness from the brain.  Ancient Greek doctors did understand that the brain was where thoughts happen, but didn’t know how to deal with brain-related problems.

I would guess that the behavioral issues some people have with traumatic brain injuries inspired the evil spirits idea. I have to wonder whether they thought the survivor had been possessed.

By the 17th century, treatment of brain injury had evolved, but not much real progress in understanding TBI and the workings of the brain had been made.

In 1685, King Charles of England experienced a massive stroke and a crack team of state of the art physicians was brought in to treat him.

The physicians shaved his head, applied pigeon droppings to his feet, and put the king through some blood-letting. He was given sneezing powder made of hellebore root; forty drops of extract of human blood; black cherry water; gentian root; dissolved pearls; beet root and a good number of other state of the art (for the times) liquids and substances too gross or obscure to list. (And this is the treatment the king received—imagine what the commoners got).

It will probably not be any surprise to anyone reading this to learn that the king died. He hadn’t been trepanned as far as I can tell, but he obviously still got some pretty crude treatment. It will also not surprise anyone that if I had to experience a major stroke I’m glad it’s in these times.

By the 18th century medical practitioners had come around to considering that a brain injury and the accompanying behavior changes might be due to pressure on the brain (they actually were starting to get kind of get more on the right track; the stroke I went through was hemorrhagic and there was excess blood causing pressure in my brain, so I’ve had that condition). Some time in the 19th century it started getting to be recognized as a valid hypothesis and harking back to trepanning, opening the skull was a preferred treatment. A link between psychosis and injury also started to prevail.

But they didn’t have the techniques or the equipment we have now.

Our understanding of the workings of the brain took a major turn for the better in the 1850’s when a man named Phineas Gage suffered a steel rod, propelled by a gunpowder blast, penetrate his skull and exiting on the other side—and lived to tell about it.

He also lived to be examined and studied. One of the problems for physicians, neurosurgeons and psychologists had been that they had never been able to observe a living brain, and they finally had one. They were able to map the path of the steel rod through his skull and brain and to compare the changes in his behavior from before the penetration to his current behavior, and that was much of what started to finally lead us to where we are now (I’ve written about him before).

That understanding didn’t carry over to non-practitioners and the general public. TBIs in veterans of World Wars I and II were said to be shell shocked; boxers—who receive multiple blows to the head– were called punch drunk. Other traumatic brain injuries still were not yet being recognized as brain injuries.

In recent times traumatic brain injuries are better understood by the medical/psychological communities, and have started to make into the awareness of the general public. Research continues and no doubt treatments will improve, now that we have better technology and understanding than ever.

Also, without a doubt, is that what I’ve written here is the bare bones simplicity of the history of TBI treatment; I think I got some of the basics right and I thought it was pretty interesting; I hope you will too.

And let me say again: if I had to have a brain injury at all, I’m glad it happened now, rather than in a previous century.

« Encouragement in Education is the BEST
Self Care Quote Series: Rod Rawls »