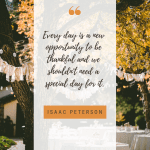 Surviving a major stroke made me aware of how fragile and precious our lives really are. That experience sure changed the way my eyes see the world and it changed the man looking out through them.

I was extremely lucky to survive the experience and I am continually being reminded of that by people in my life and by others who come and go in my life. I’m told by people I talk to and by casual observers that if they hadn’t known I am a stroke survivor they’d have never guessed.

I also hear from a lot of people that know or knew someone who’d experienced a stroke and my condition just doesn’t seem to match up with the experiences of others. Even people who went through milder strokes than the one I had seem to actually have been hit harder than I’ve been. I’ve been able to hold on to enough of my old self to kind of pick up where I left off and to build on it. I’ve sure been lucky.

I’ve been getting reminders about just how stiff the odds I beat were. I won’t detail all the bullets I dodged in order to still be here with all of you, and still breathing. I’ve written before about all the friends I’ve known who had strokes since the one I had and didn’t survive

The latest passing happened yesterday, to a friend named Bill. Bill, a man slightly older than myself, came into my life four years ago through my roommate, Gary. He and his wife would come around with gifts and reading material for Gary and to take him out for a nice meal. Gradually Bill and I became friends in our own right as well.

Bill was hit by a stroke last week and when he was discovered, was put in hospice care. When I learned about what had happened to Bill, I called the facility where he was and was allowed to speak to him. I couldn’t visit him because of Covid.

I had tears in my eyes the whole time we spoke; his voice was so weak and he said he could barely move. He didn’t bear any resemblance to the vibrant, outgoing man I knew who was always so full of life and love.

All I could do was hope he would have the same kind of experience I did and beat the odds. But I knew the whole time we spoke he wasn’t long for this world.

Bill passed away right after we spoke night before last. I was notified by his daughter yesterday morning.

I was the last person he talked to in this life. I felt the anguish James Taylor felt when he started his song Fire and Rain with the words “Just yesterday morning they let me know you were gone…” That song was always an emotional experience for me, but more so now. I still have tears in my eyes.

Bill always liked my writing and the advocacy I’ve done on behalf of stroke and TBI survivors, and I know he would want me to keep it up. I will, for as long as I can.

But in the meantime, my advice to you is learn about stroke prevention and the warning signs of stroke in yourself and in others. Having a fatal stroke is a horrific way to leave this planet no matter who you are.

My next essay will be about stroke prevention and warning signs of a stroke. We don’t want to lose you.

This one’s for you, Bill.

« Games For Healthy Brains
Slow Down! Here Comes Some Wabi-Sabi. »