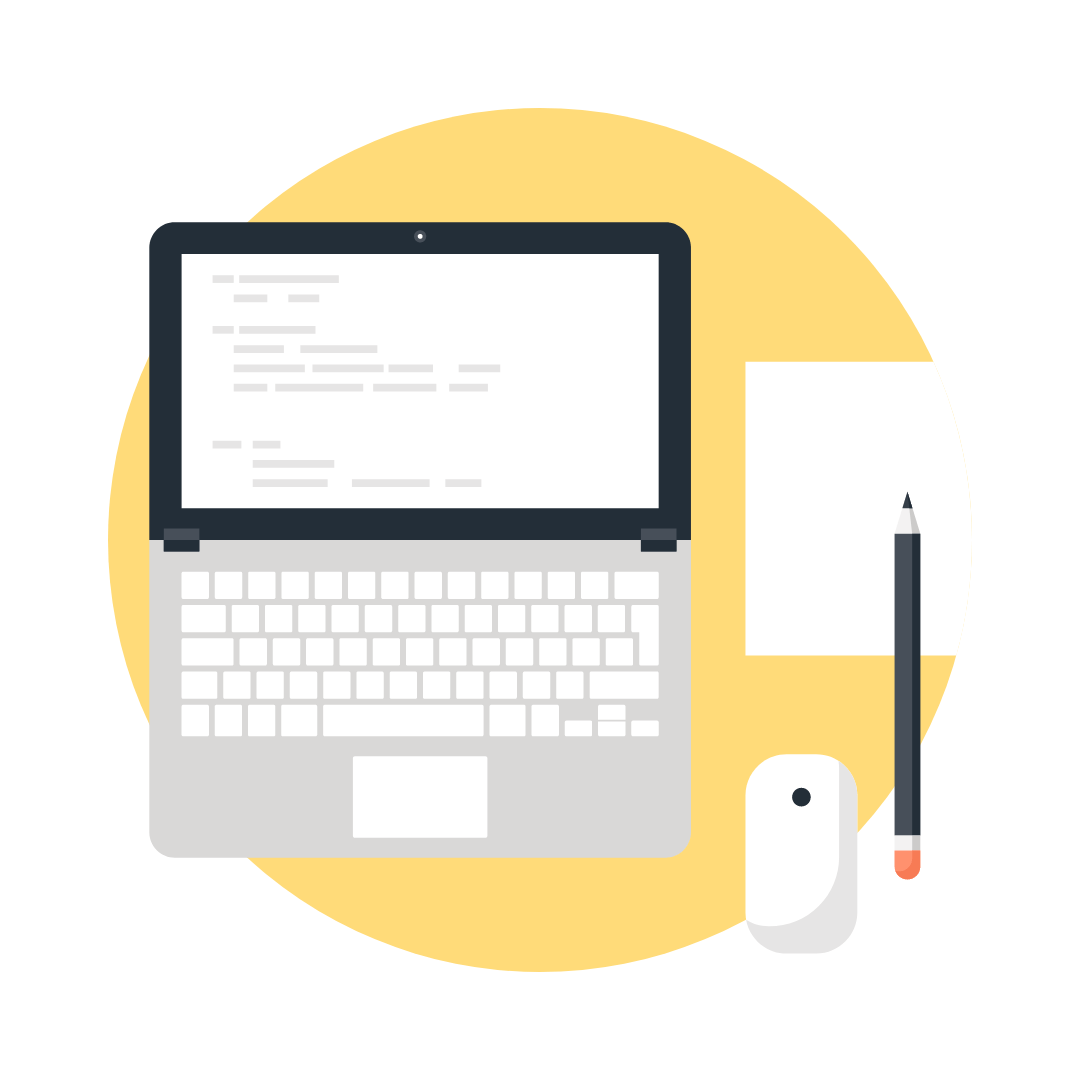 Of all the things I’ve managed to accomplish since my traumatic brain injury (TBI), going back to work isn’t one of them. My doctor recommends against it, due to my problems concentrating for long periods, my continual sleepiness, lack of energy and stamina, and the fear I might have another seizure.

That’s surely not the situation with many TBI survivors, not as long as it’s necessary to have some sort of income. Steady income is a need most of us have, and for most people that means having a job. But if a TBI is making your life more difficult, going back to your job can be one of those really big difficulties—assuming your job has been held open for you.

I’m not qualified to tell you how you should go about returning to work, but I can pass along a few tidbits of things I’ve learned, and what friends have told me about their own experiences.

First, it seems to be a good idea to have a conference with your boss and explain what’s happened to you and how you think it might affect your job performance, if at all. If you think your TBI will affect your performance, ask what accommodations might be necessary to give you the best chance of doing your job to the best of your abilities.

Keep in mind there are anti-discrimination laws, like the Equality Act of 2010 and the Americans With Disabilities Act. Those acts require that employers make reasonable adjustments for those with disabilities.

No matter how much you may want or need to go back to work, don’t rush it any more than is necessary—ease your way back in as much as possible. Your employer may be willing to give you time away from work to give you a bit of time to recover until you feel comfortable returning.

Some possible accommodations to negotiate with your employer are:

All of the above suggest that you might not be the only one making adjustments. Employers might still expect a certain production level, but a good employer will work with you.

Co-workers can be difficult since you have a disability they can’t see, and they may not understand when they see you being allowed to skate through your job, not realizing that you have an injury and may not be able to perform at your former level. Employers can help, if they are willing to help your co-workers understand your condition and why you need special consideration.

My friend Heidi emerged from a bad auto collision, but with a severe brain injury. She was working full-time, and tried to continue working for over half a year, though it was difficult.

Heidi ended up going on medical leave for over a year. She says she then was forced to fight in order to be allowed to return to work.

About resuming work, she says, “It’s still a struggle every day,” and it took nearly two years for her co-workers to see that she still has much to offer. “I’ve had to compensate and overcome in ways my coworkers will never understand or appreciate.”

Another friend of mine, Sue, was a special education educator when she took blow to the head when she was struck by a kicked ball.

Sue took five days off work, after which her doctor told her she could return to work for two hours a day for five months. From there she worked her way up to three hours a day and increased her work day by 30 minutes each month. It took her about two years to work herself back to full time.

Although Sue was eventually able to work her way back into her job, she still suffers from post traumatic stress (PTSD) from her injury. Her short term memory suffers. At first she carried a pencil and paper to remind her of directions she’s been given or what someone had said to her. She uses prescription medications to help her cope with the aftereffects of her brain injury.

Sue says the worst part of returning to work was the treatment she endured by co-workers who she said were not nice to her. Their attitude, she said, was, “You look just fine. Why can’t you do this? I know other people who got hit in the head and they’re fine; they don’t have the problems you have.” She ended up avoiding the co-workers to minimize her discomfort.

Her energy and stamina had decreased, especially during a particular time of the day. She was able to compensate by adjusting her schedule around those times.

Sue ended with some advice for TBI survivors returning to work: “Don’t push yourself, because you’ll take one step forward and two steps backward, and that’s not the right way to go.Just be grateful you have life and be grateful that you still have the opportunity and ability to help other people. Stay positive and hopeful.”

Today for #TipTuesday, we’re sharing an image gallery of self-care tips and ideas from the BEST Team and some of our BEST friends.  Enjoy! 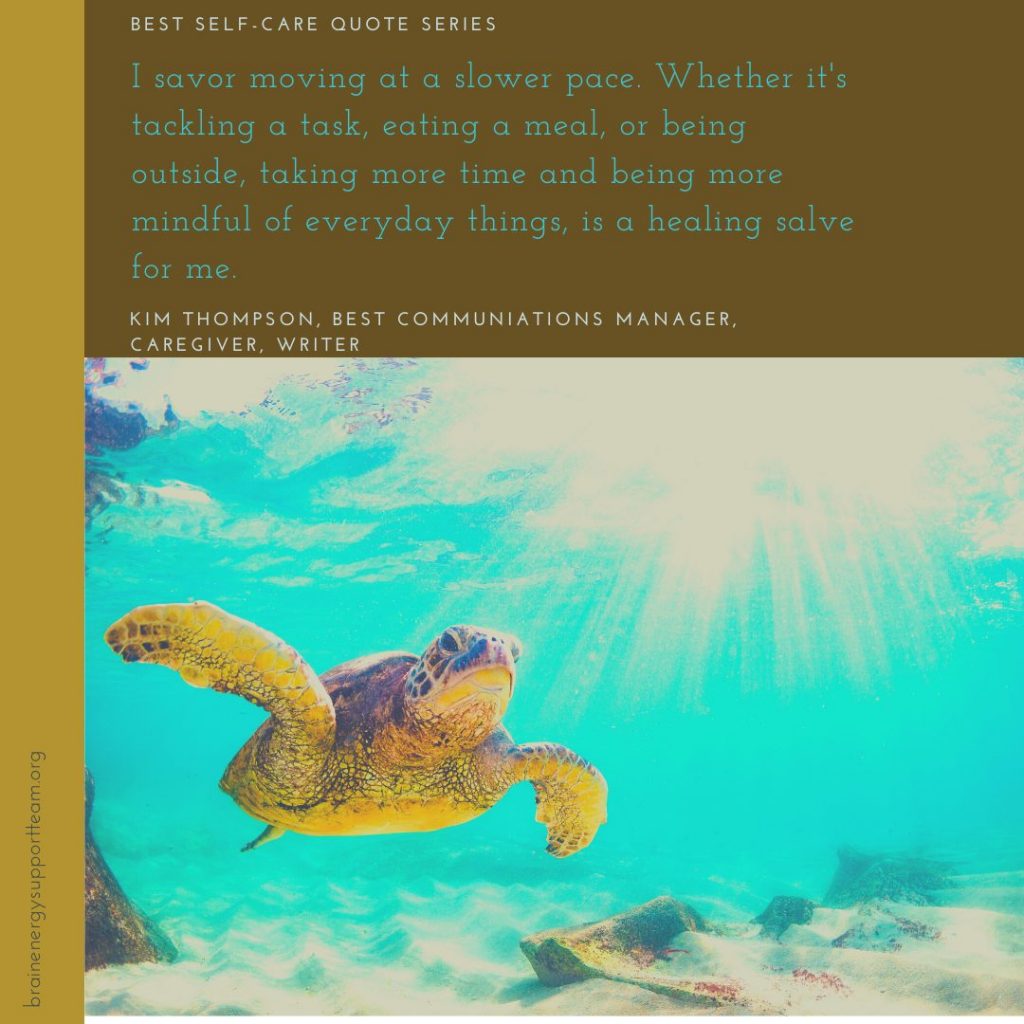 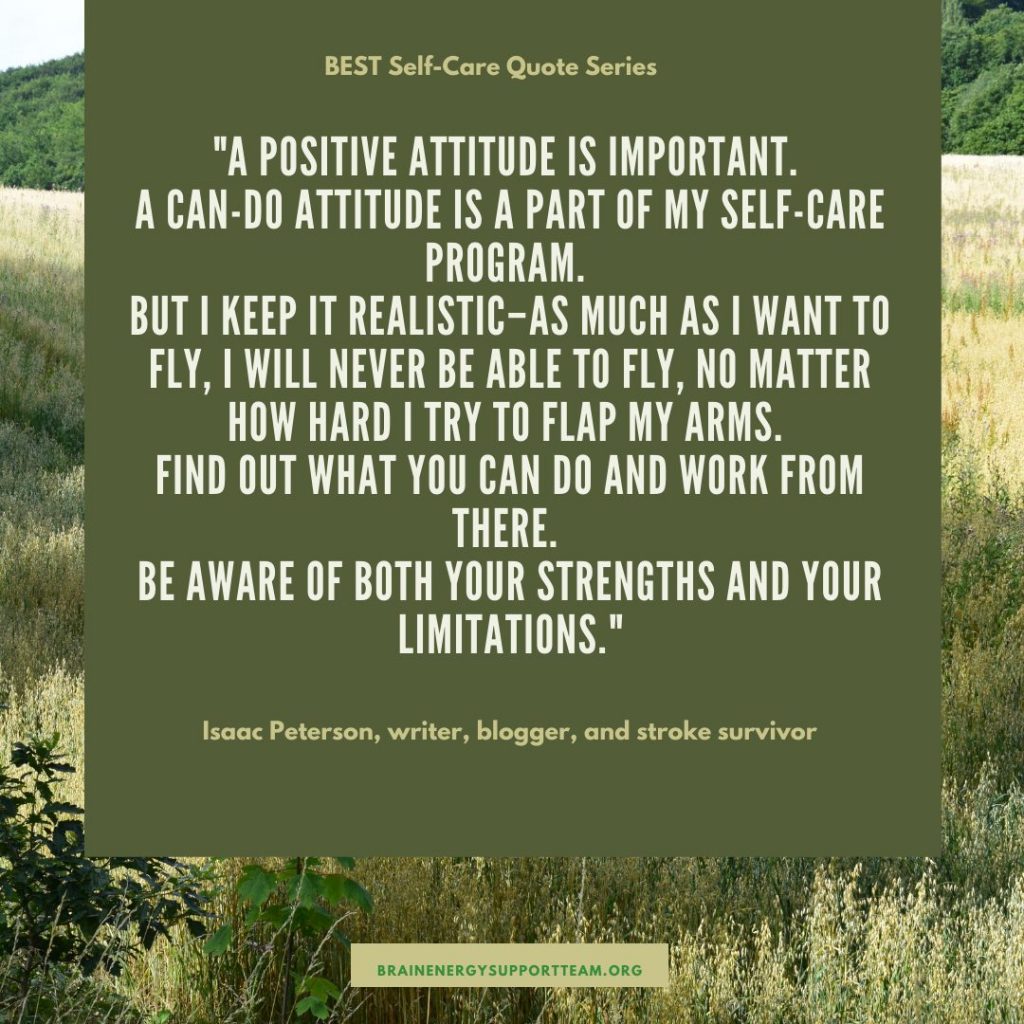 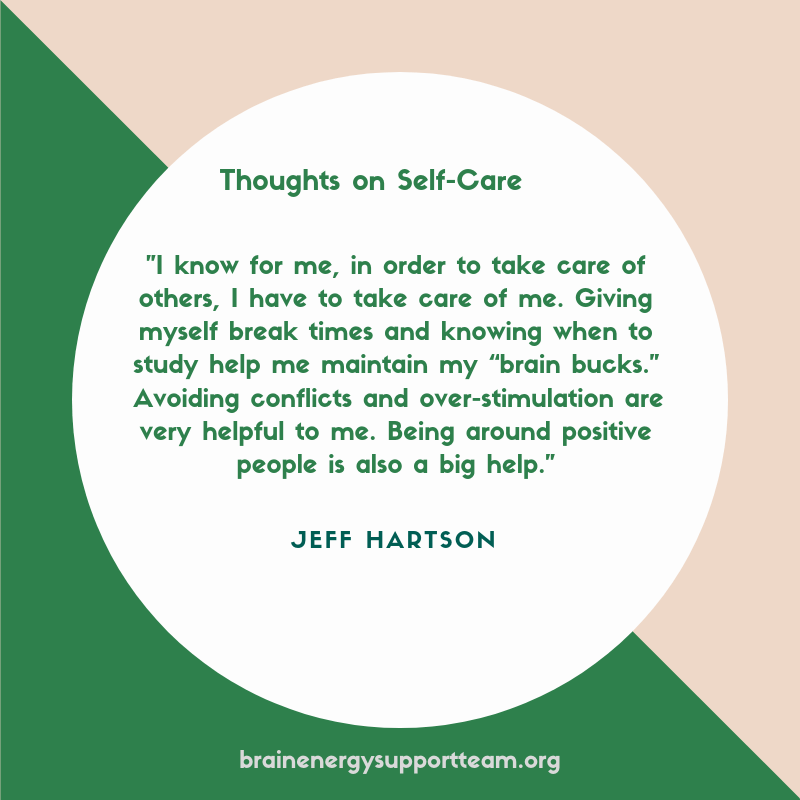 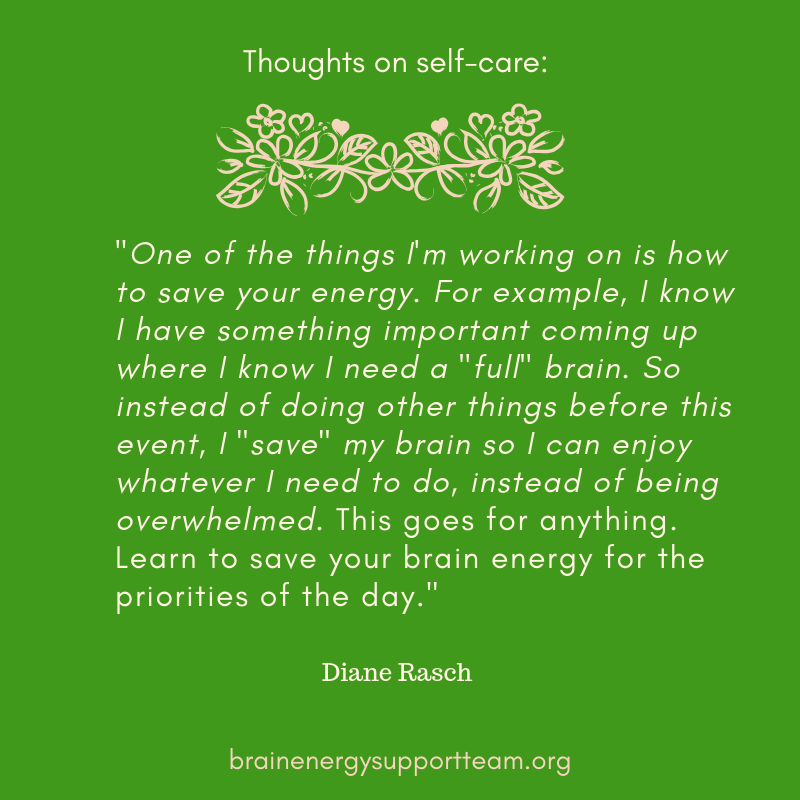 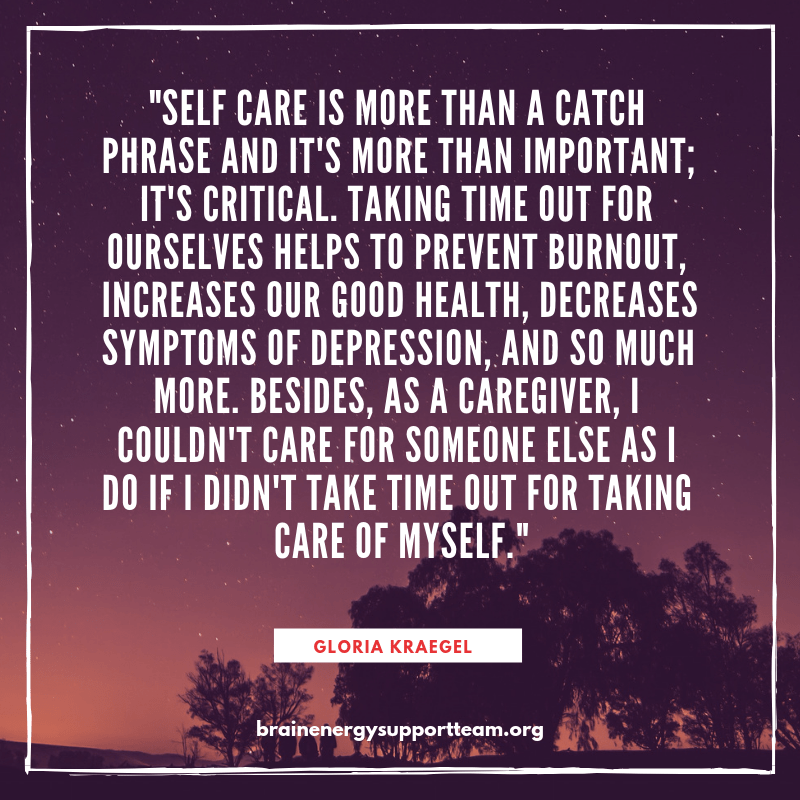 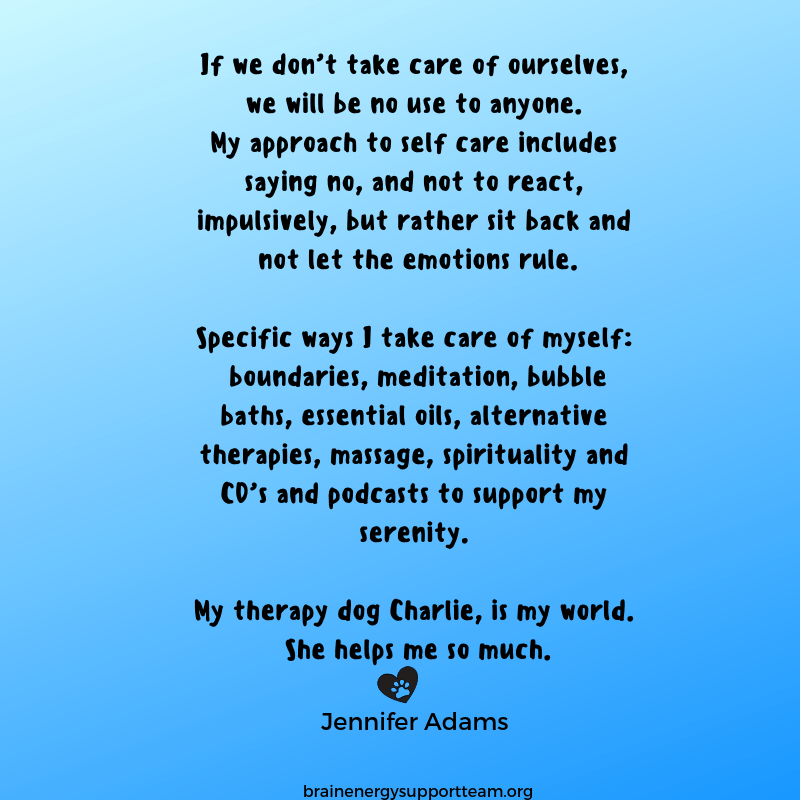 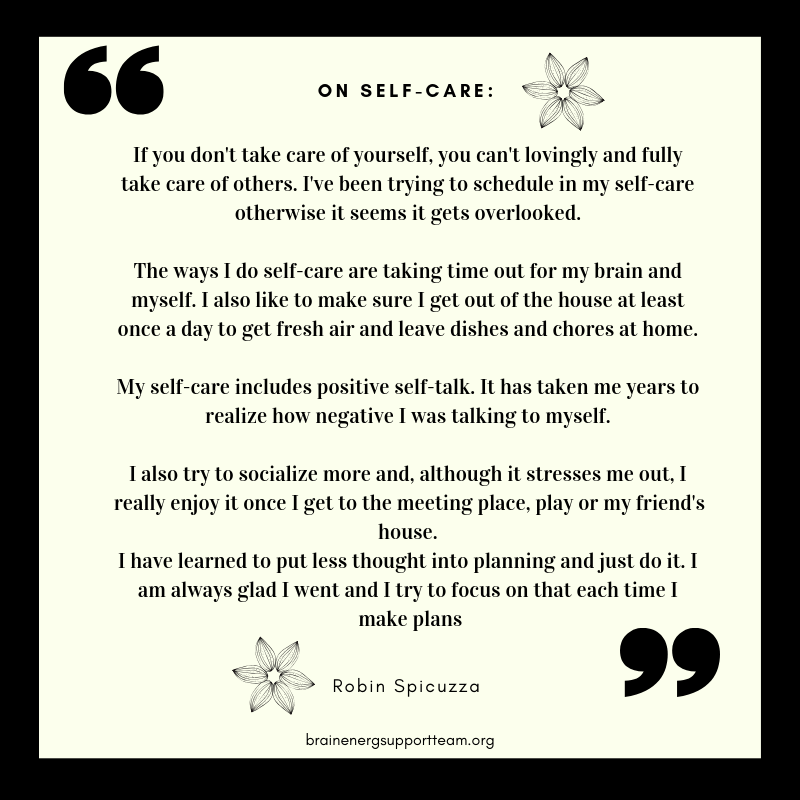 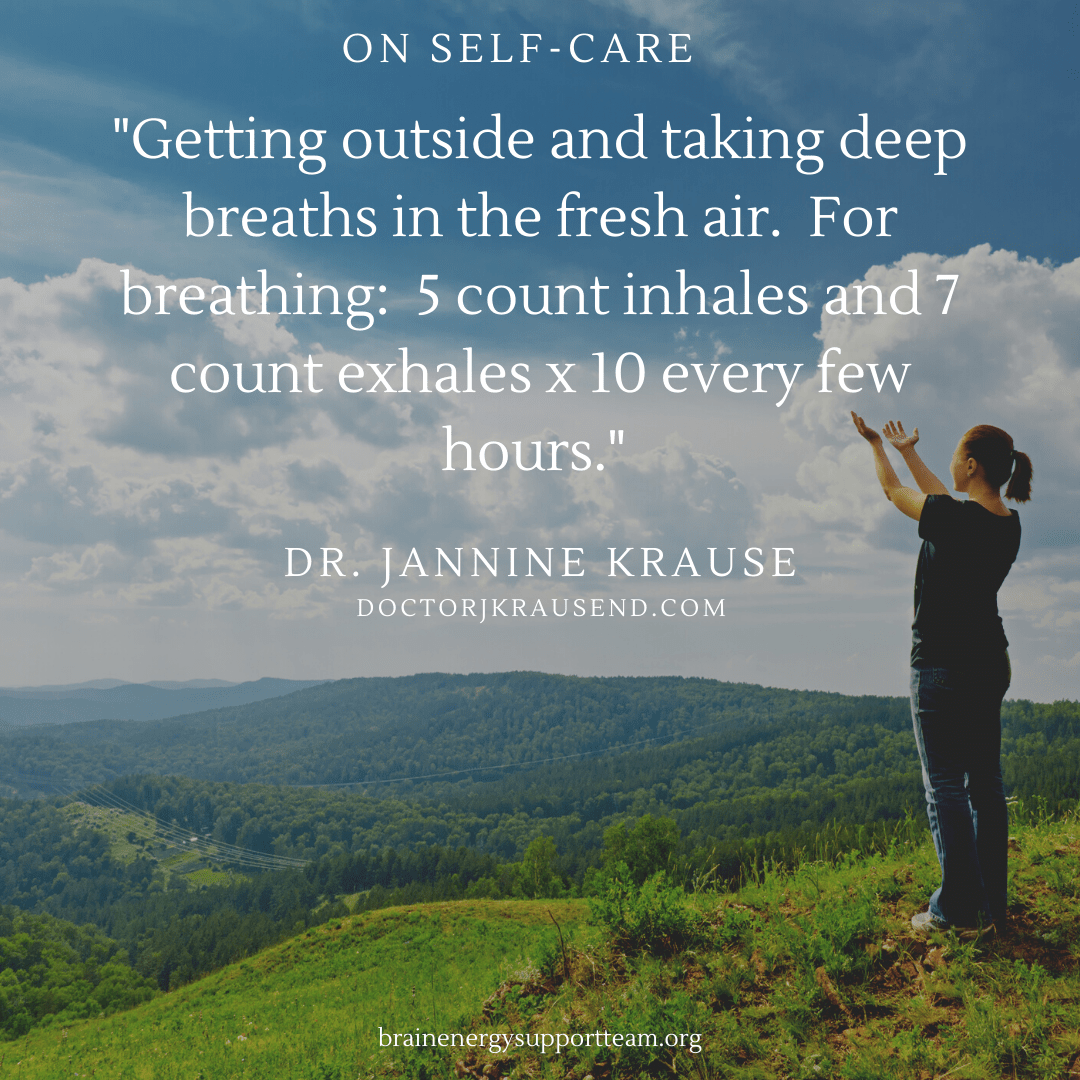 Following is some exciting community news from Janet Novinger of Imaginal Network, our dear BEST friend, supporter and community partner.

Janet is going to be featured in an upcoming Tedx Talk on Saturday, August 29, 2020 from 12 PM to 1 PM PST, called, Getting to Know a Changed Brain.

There is no charge to attend this virtual event.

For more information, check out the event description below taken from the event website, Sno-Isle Libraries.

Getting to Know a Changed Brain, a Sno-Isle Library Tedx Talk by Rob Pezely and Janet Novinger

Janet is one of the founders of Imaginal Network, dedicated to those living with traumatic brain injuries. Rob became a member after an automobile/pedestrian collision in 2017.

Janet Novinger’s passion for the need for respect in personal and professional interactions is foundational to her work with individuals living with brain injury. Through coaching, consulting and training, she supports organizations in creating environments where people can give their best. Janet continues to adapt to brain injuries she has incurred and is one of the founders of Imaginal Network, which is dedicated to those living with TBI (traumatic brain injury). Network members come alongside all those on a a journey of survival, learning how to function, and ultimately learning how to adapt to a changed brain and body.

Rob Pezely is a passionate bicycle mechanic and a past customer success manager. He became a member of the Imaginal Network following a crosswalk automobile/pedestrian collision in 2017. This network is creating new possibilities for fellow TBI” (traumatic brain injury) adapters. This group is dedicated to those on a journey of survival, learning how to function, and ultimately learning how to adapt to a changed brain and body.

On the BEST blog, we’ve been fortunate to have some amazing food and nutrition experts, along with some access to other great resources, to help us serve up healthy food ideas, simple food preparation tips and organization, and other delicious inspirations to keep our brain and bodies healthy and energized.

Following, are some links to a library of articles on various topics related to food.  Just click on the highlighted word, here, to view. Enjoy! 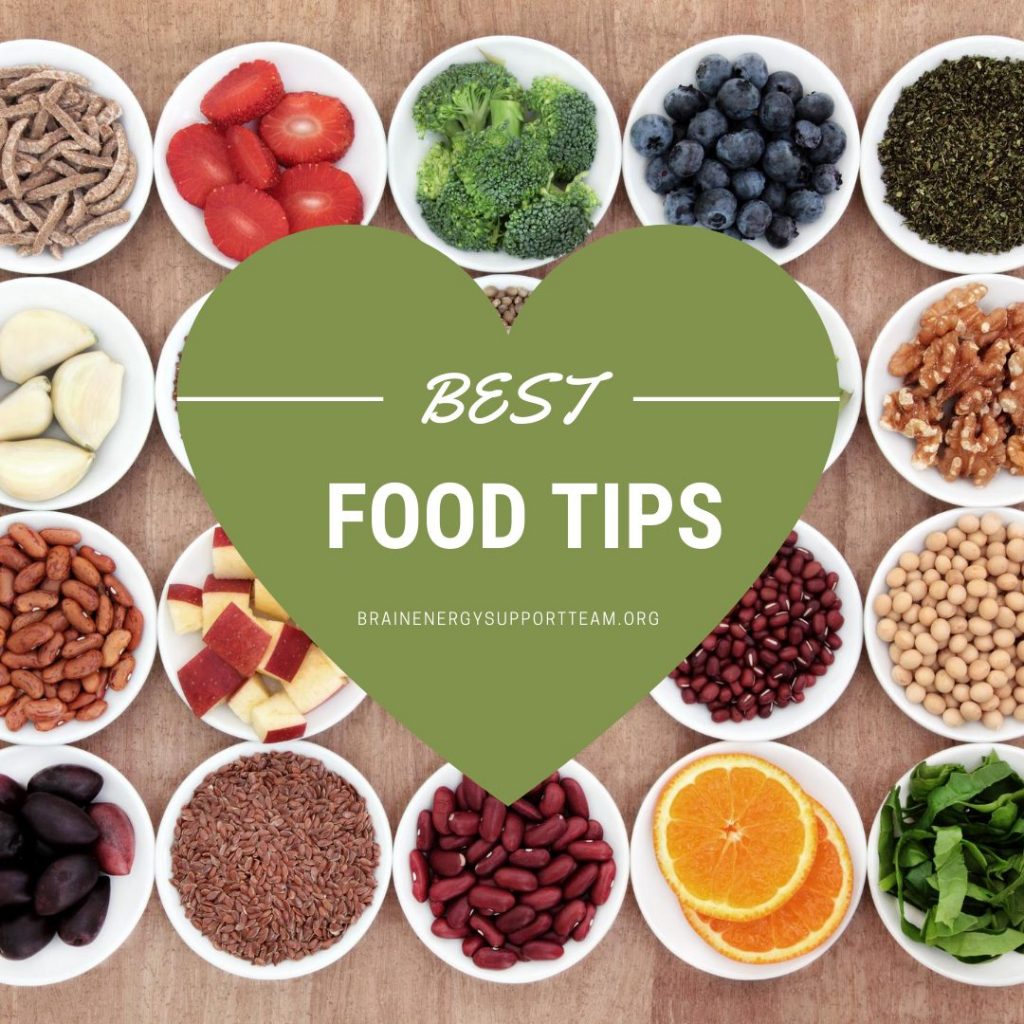 Have other healthy food ideas to contribute? We’d love to hear from you! Reach out by email to Kim T. at kimt@brainenergysupportteam.org with your thoughts.

Our BEST Superhero Team Members are THIS and more . Join us to support brain energy , brain injury awareness, education and opportunities for all!

Click here to go to our donation and membership information page.

The Brain Energy Support Team (BEST) is delighted and honored to share TWO superheroes as our July 2020 BEST Superheroes of the Month! 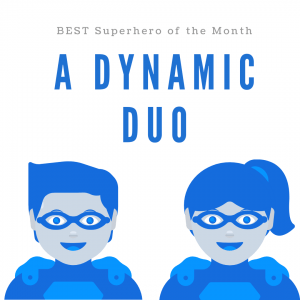 Not only are Heath and Renee partners and founders of Collidedscopes, a brain injury team and support organization for brain injury survivors and caregivers, they are partners are real life, too.

Both superheroes are passionate about supporting fellow brain injury survivors and caregivers through coaching, mentoring, peer support, resources, and education. Their positive energy, generosity and kindness is unparalleled.

Collidescopes has also been a wonderful and supportive BEST friend to the Brain Energy Support Team as an enthusiastic supporter and participant in BEST events and activities.

Here’s what their nominator had to say about them:

Heath Snyder and Renee Love have put their passion to help and support others as a dynamic superhero duo for both the brain injury and caregiver communities. They are the founders of Collidedscopes, an innovative, energetic and empowering organization that provides brain injury survivors and caregivers support, tips, strategies and resources to navigate the journey forward. Their enthusiasm,love and care for fellow support organizations and individuals is amazing; they are truly a BEST friend. So grateful for that all they do for our community and beyond!

Thank you Heath and Renee for all that you do! We appreciate you!

Know a real-life superhero in the brain injury community that you’d like to share with us? Nominate them today for the BEST Superhero of the Month. 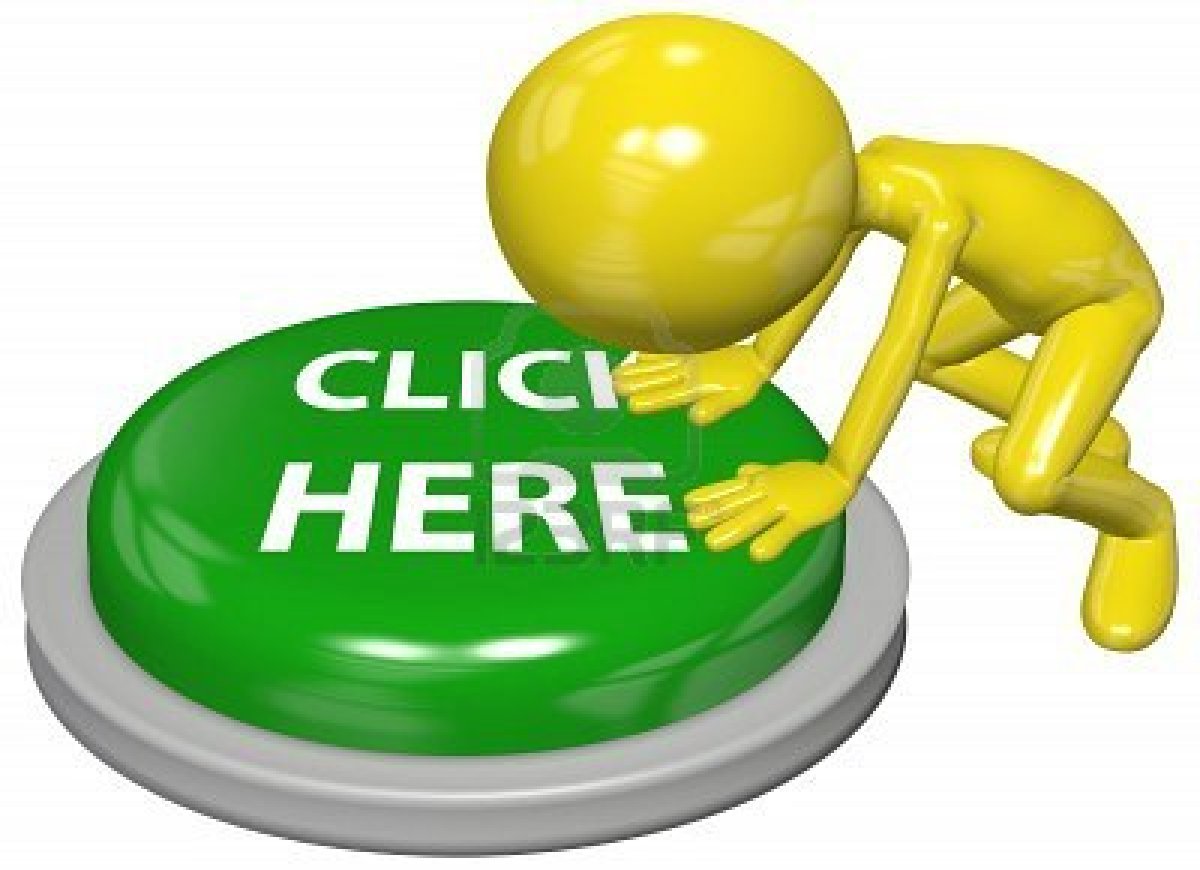